fshnski wrote:I have seen many stupid acts in the 30 years I have boated on Winni. I never let them bother me so much that they ruined my day.

How can you tell a boat captain is drunk at the helm?

Can you tell by observing repeated violations of NH's RSAs?

I AM a nut, when it comes to drunken Winnipesaukee boaters...

This IS NOT the worst of YouTube's Lake Winnipesaukee videos—which were deleted!

This is bad enough—I've been following much worse—YouTube has removed them.

Would you share the lake with these people—'cuz you are!

WHL wrote:I don't happen to agree with you about the speed.  I think speed is the very least problem on the lake.

Then you might agree with the current efforts to change—for the worse—NH's boating RSAs regarding rafting to shoreline trees, or removing of mufflers from speedboats. (What passed the NH Legislature, which I termed the "Trojan Horse Bill".

Nor would you agree with this letter, written about a dual-fatality not far away, where they have no 150-foot rule on distances:

OUR LAKE HAS BEEN TURNED INTO A WATERY GRAVEYARD!

There is no debate that Mr. LaPointe’s substance abuse had recklessly and shamefully contributed and caused the deaths of the unsuspecting innocent passengers in the victim’s boat. Law states that a person commits the crime of manslaughter if he/she recklessly "causes the death of another human being”.(In Mr. LaPointe’s case, 2 people died.) It must be the old policy question regarding the validity of punishing a person, Mr. LaPointe, criminally for reckless activity when the "victims" to some degree participated in reckless conduct. But is this fair to let Mr. LaPointe off the hook for manslaughter? Is it simply a legal loophole?

Mr. LaPointe clearly operated his 32’ cigarette boat with disregard for other boaters, especially on a dark night while knowing other boats were nearby. Mr. LaPointe clearly used his huge offshore boat as a weapon in a manner that endangered life, beside operating his boat too close too shore. May God forbid that his “NO PATIENCE water weapon” did not slam into a lakefront home with sleeping occupants instead of those trees.(Yeah, we saw the mess.)

Were the poor victims negligent? Maybe, but then so, in some respect, IS EVERY other swimmer, jet skier, canoe operator, kayaker, and boater on the Long Lake waters. Reckless behavior can be interpreted in 100’s of different ways, so then nobody will or could ever be convicted of manslaughter charges when they, in fact, did recklessly kill other innocent people. As both a MA resident and a summer Harrison lake resident, I want to see justice prevail. We, too, have had near misses with other watercraft on Long Lake due to other boater’s speed and recklessness. Cumberland County Courts did not set a good example to the community today.

It’s not comforting to know that if I’m ever recklessly killed on Long Lake waters due to other’s negligence that justice will not be served in our court systems due to an age-old legal policy question. Our Harrison property taxes are over $10K annually and my family can no longer enjoy Long Lake water sports with this hanging over all Long Lake citizens. This deadlock just made it easier for the next boating killer to get off easily with another form of OJ trick. Nothing like hurting Long Lake tourism!!

(Rob LaPointe got 5-years of "Home-Confinement", then tearfully disavowed his former statements of guilt!)

Well, do you have any fear of drunken kayakers?

No, but I don't go out on the lake in fear, either.

But you blame speed when it is not speed and heavy boats. It is alcohol and not even alcohol itself, but overindulging.

WHL wrote:No, but I don't go out on the lake in fear, either.

Then you need a smaller boat!

WHL wrote:But you blame speed when it is not speed and heavy boats.  It is alcohol and not even alcohol itself, but overindulging.

Victim Jack Hartman's son-in-law was at the helm of the 22-foot boat.

Jack's wife screamed—too late—that the 36-foot Baja was about to run them over. At night, I doubt anyone at the helm of an oversized 36-foot Baja could have seen over the oversized foredeck.

This is a smaller Baja: 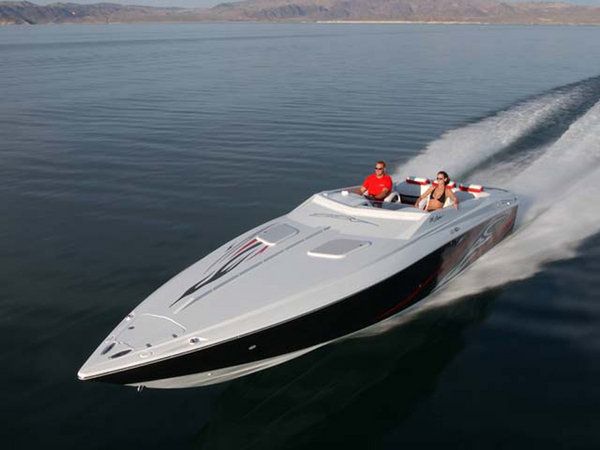 Not just after dark, these ocean-racers are just not suitable for a residential lake like Winnipesaukee—period.

Jack's wife screamed? Were you there?

Oversized? Please provide the definition of oversized as it pertains to this boat.

I have a similar size deck. I have not problem seeing over mine. Please provide the data that makes this one have an obstructed view.

You again refer to this as an Ocean-racer. Earlier you classified certain Donzi's within a specific cost category and superhuman mystical creatures as Ocean-racers. Since this is not a donzi and I do not see any scary abnormalities in this picture how does this fit your definition?

If you saw the Braun Bay videos, didn't you see the guzzlers? Are these the guzzlers you want operating Ocean-Racers in a fresh water lake with swimmers and endangered Loons in random/unexpected places?

Even the most drunken oversized-boat's "Captain"—President of a NH "Safety Club", BTW—was punished by having to spend only her nights in a jail bed. LaPointe had 29 traffic infractions before he killed two boaters with his Ocean-Racer. You may recall from FATP reports and WMUR, even the manufacturer came out and said the boat was inappropriate for fresh water lakes.

These people are Narcissists. Outside of politics, LaPointe is the worst I've been witness to.

(Well, maybe Blizzard—ticketed on I-93 for speeding, while waving her cellphone out her window for a better reception—after the killing would make it "a tie").

Yes I saw the drinking on the Braun Bay video. And that is exactly why I say DRINKING. What does that have to do with speed??? They are sitting there drinking.

WHL wrote:Yes I saw the drinking on the Braun Bay video.  And that is exactly why I say DRINKING.  What does that have to do with speed??? They are sitting there drinking.

Drinking is what rafters do.

Here's a video after a day of rafting/drinking:

Aren't you glad they're not going 50-MPH at you?

Still they are not SPEEDING!! Don't you get the difference. They should not be drinking all afternoon and driving a boat, I agree, but that has NOTHING to do with speeding. Those boats probably don't go 45.

This is Braun Bay, Winnipesaukee...

I don't know if LaPointe had a cowboy hat, but he did have a Sunsation—which the manufacturer said "Shouldn't be on protected waters". Funny I know the owners and builders of Sunsation. Nope you are twisting again... Thanks for playing though.

sumrluvr wrote:Funny I know the owners and builders of Sunsation. Nope you are twisting again... Thanks for playing though.

Just how well do you know them?

sumrluvr wrote:Funny I know the owners and builders of Sunsation. Nope you are twisting again... Thanks for playing though.

Just how well do you know them?

Well enough to call wayne and find out that david was misquoted. that in actuality he said that any boat on congested waters could be too much boat for the conditions. Also he mentioned that every captain should be held accountable for their actions and that alcohol played a significant role in this situation. He also wasn't supportive of this Lapointe. But as with any media or forum, sometimes what exactly is said is not reported.

David Donchecz, chief operating officer of Michigan-based Sunsation Powerboats, is originally from Bangor and familiar with the lake. He said Thursday that he thought the high-performance 32-foot Dominator, which is the model owned by Lapointe, is really too much boat with too much capacity for speed for such a narrow, congested body of water.

Long Lake stretches 11 miles through Harrison, Bridgton and Naples, and is between one quarter and a half-mile wide. On any given summer weekend it can have hundreds of watercraft on it, the Warden Service said. The lake is popular, in part, because it connects to Brandy Pond in Naples from where boaters can travel the Songo River to and from Sebago Lake."

"Your people" at Sunsation have a major CYA spokesman, where "misquoted" comes in very handy.

BTW: Who is the "chief operating officer" today?