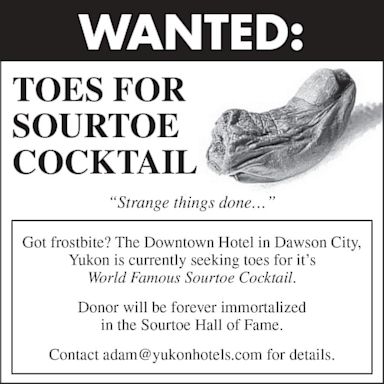 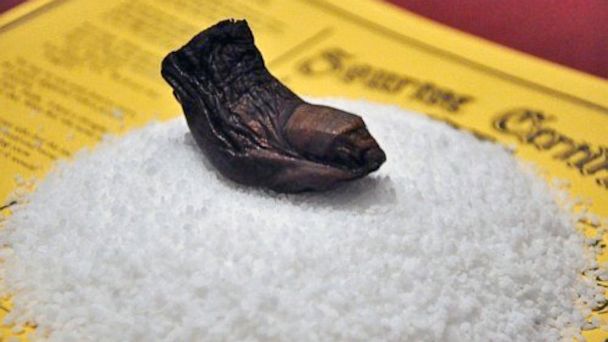 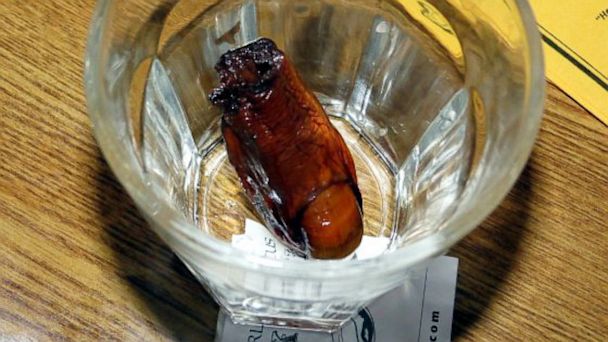 Cocktails: There are endless ways to stir one up. A shot of this, a splash of that, and don’t forget the amputated toe. That’s how one Yukon hotel serves them up.
It’s called the Sourtoe Cocktail and more than 60,000 people have tried it, according to the staff at the Downtown Hotel in Dawson City, Canada, where the cocktail is served. These drinkers belong to the Sourtoe Cocktail Club. For $10, you can, too.

Here is how it works: Bar patrons can choose any drink or shot, but it becomes a Sourtoe Cocktail when the toe is added.  The Downtown Hotel has been serving the drink since 1973.

It all started when riverboat Capt. Dick Stevenson was rummaging through a cabin in the Dawson City area. He came across a toe being preserved in a jar of moonshine. Word around town was that the toe had been preserved in the alcohol since the 1920s, when guys in the area were running moonshine by bobsled. Their toes would freeze in the winter weather conditions, and it was easier just to cut off the frozen toe than find help.

In the past 40 years, the Downtown Hotel has gone through about 12 toes. The original was swallowed in 1980. Whenever that happens, the swallower must pay a $500 fine. Toes are hard to come by, so swallowing the toe is discouraged.

The bartenders watch closely. Because the toe can be put into any drink, Downtown Hotel bartenders said most people choose a shot to get it over with quickly.

The hotel recently had to put an ad out on its website so it could keep the Sourtoe Cocktail on the menu. Adam Gerle, a hotel spokesman, said a patron had swallowed the toe intentionally in August.

“The toe was swallowed by Josh from New Orleans. … Some reports are that he was working in Dawson City for the summer, and it was his last day so it was a bet from his buddies,” Gerle said. “He came in with a couple friends. They were prepared to do the Heimlich [maneuver] on him if he choked. He paid without being asked and left.”

Dr. Robert Truax of the UH Case Medical Center in Cleveland said choking would be the only health hazard associated with swallowing the toe.

“Consuming the toe would not have any ill effect,” he said. “As long as it’s well preserved and drained of all blood and bodily fluids and preserved long enough to dry out, so there is not a way for infectious conditions like Hepatitis or HIV to exist.”

Truax added that if the toes were dropped in a high enough whiskey count, any infection could be killed. He said recent attention toward the cocktail could encourage other bars to create their own version and if the toes they use have not been preserved safely, there could be an issue.

In order to prevent anyone intentionally swallowing the toe at the Downtown Hotel, the fine was increased to $2,500. “There is one toe left as of now so we’ve been welcoming new toes,” Gerle said.

Similar topics
» Stay away from ObamaCare
» Boating
» You Wanted Compromise?
» GOP in shambles...What a bunch of cowards
» Our Famous Presidential Untruths in History: