During a routine test of our back-up systems Saturday morning, [our] Electronic Benefits Transfer (EBT) system experienced a temporary shutdown. While the system is now up and running, beneficiaries in the 17 affected states continue to experience connectivity issues to access their benefits

The poor grocers must have had fun putting all that food back, huh?

WHL wrote:The poor grocers must have had fun putting all that food back, huh?

"Shoppers left carts of groceries behind at a packed Market Basket grocery store in Biddeford, Maine, because they couldn’t get their benefits, said fellow shopper Barbara Colman, of Saco, Maine. The manager put up a sign saying the EBT system was not in use. Colman, who receives the benefits, called an 800 telephone line for the program and it said the system was down due to maintenance, she said.

“That’s a problem. There’s a lot of families who are not going to be able to feed children because the system is being maintenanced,” Colman said. “No one should put maintenance in during the daytime.” (source)

Despite the fact that government workers report orders from the Obama administration to “make life as difficult for people as we can”, the nation is assured that the EBT failure is in fact due to server issues and NOT due to the government shutdown..."
—SHTF site

A Louisiana Wal-Mart decides to accept EBT card purchases, even though the system is down.

Our third-world society is being run by the National-Socialists to the third-world appearance of the old USSR's many "Government-run Stores", where even toilet paper shelves were empty.

News Hawk wrote:A Louisiana Wal-Mart decides to accept EBT card purchases, even though the system is down.

Our third-world society is being run by the National-Socialists to the third-world appearance of the old USSR's many "Government-run Stores", where even toilet paper shelves were empty.

The rest of the story that goes with that picture…

For several hours, EBT cards stopped showing their balances in parts of Louisiana. Walmart stores in Springhill and Mansfield, LA took pity on EBT users and announced that they would accept the cards on good faith, so welfare users “could get food to their families.”


What happened next is both Walmarts were jammed packed. Entire shelves were cleared as EBT card holders raced to the stores and filled up carts with anything they could grab.


Walmart began accepting the cards on good faith at 7:00 PM. However, at 9:00 PM the balances started showing again. Immediately a woman was caught trying to “buy” $700 worth of stuff with a balance of $.49.

When loudspeakers announced that EBT balances were showing again, dozens of patrons immediately abandoned their carts. It seems the majority of the people remaining in line were knowingly trying to defraud Walmart. Both Walmarts were left cluttered with jam packed carts. The EBT card holders were simply trying to get more free stuff at Walmart’s expense.

We should make sure they have insurance.

Isn't that just pathetic??!! They get something for free and they want more. And we are supposed to feel bad for them and give them more and more ???

Does the most obese nation in the history of the world need more free government food?

Walmart’s shelves were cleared in two cities after a software malfunction cleared spending limits from cards for two hours.

Springhill Police Chief Will Lynd said they were called in to help the employees at Walmart because there were so many people clearing the shelves. The Walmart Supercenter Mansfield shelves were cleared in two hours.

“It was worse than anything we had ever seen in this town,” Lynd said. “There was no food left on any of the shelves, and no meat left. The grocery part of Walmart was totally decimated.”

“I saw people drag out eight to ten grocery carts.” One person hauled away more than $700 worth of groceries, Lynd added.

Mansfield’s Chief of Police Gary Hobbs said customers were only “pushing and shoving” with reports that customers were checking out with six to eight shopping carts.

The glitch was caused by a power outage during a routine maintenance test by Xerox of their government-funded EBT debit cards. Electronic Benefits Transfer cards allow recipients of government food stamps to purchase items under a preset limit.

“We did make the decision to confine to accept EBT cards during the outage so that they could get food for their families,” said Walmart spokeswoman Kayla Whaling. Other stores did not.

From 7pm to 9pm on Saturday, people loaded up their trolleys but at 9pm the spending limits on cards were being shown. One woman was detained because she rang up a bill of $700 and only had .49 left on her card. She was held by police until corporate Walmart said they would not press charges if she left the food.

Just another day in AmeriKa.

Your money is being constructively used to buy the votes of the parasite layabouts.


It wouldn't be possible without Government...

Walmart's as stupid as this administration

Wal-Mart is standing behind a decision to let people walk with hundreds of dollars in free food at two Louisiana stores Saturday night when an electronic glitch briefly lifted the spending caps on the cards of food stamp recipients.

“We know we made the right choice,” Wal-Mart spokesman Kory Lundbergtold ABC News.

The Louisiana's Department of Children and Family Services said Wal-Mart should have limited purchases to $50 each during the emergency, and the chain will have to cover its own losses — an amount Wal-Mart did not specify, ABC News reported.

Word quickly spread in the Louisiana towns of Springhill and Mansfield that a food stamp glitch was giving recipients an unlimited balance on their Electronic Benefits Transfer (EBT) cards, causing two Wal-Marts in the area to be completely ransacked.

Local police officers were called in for crowd control, though no one was arrested, the report said.

“It was definitely worse than Black Friday. It was worse than anything we had ever seen in this town,. There was no food left on any of the shelves, and no meat left. The grocery part of Wal-Mart was totally decimated,” Springhill Police Chief Will Lyn told KSLA-TV.

Over the course of two hours, frenzied shoppers filled their carts with everything they could get their hands on, but when the cards came back online at 9 p.m., people abandoned their carts and left, the Daily Mail reported.

These are the voters the left is so proud to brag about.

This is what they couldn't steal ...

WHL wrote:Isn't that just pathetic??!!  They get something for free and they want more.  And we are supposed to feel bad for them and give them more and more ???

'Til we become The Soviet Union, with empty Government-run store shelves, and a long line just for toilet paper!

I think Russia and China might be more capitalistic than we are now.

WHL wrote:I think Russia and China might be more capitalistic than we are now. 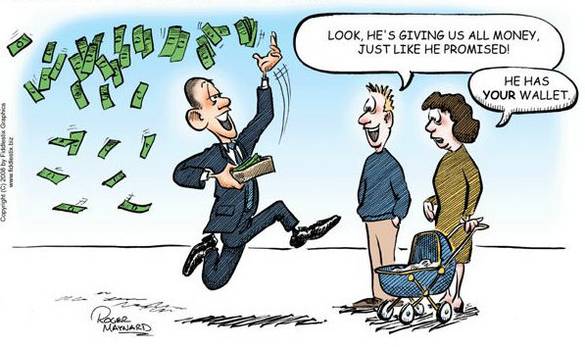 EBT cards are the "Magic Cards"...