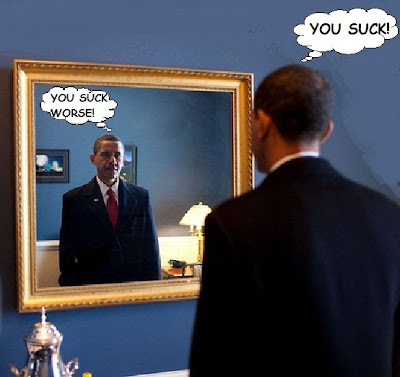 In one speech, Obama touts the “growing and improved” economy with 7 million new jobs.
In the next, he touts the need for extending unemployment benefits.

One minute Obama and his supporters say Obamanomics is working, the next they need YET ANOTHER extension of UE.

Obama essentially said, it was unpatriotic to criticize people being on unemployment for over 99 weeks and that he has never met anyone to take advantage of the system. (another lie by the Big-O*)

But it's ok for Obama to criticize small business owners that could have hired people if they would just get off their asses and help the job market.  Never mind the higher taxes and regulations.


*While Obama doesn't hang in circles with very many unemployed people. It has  been proven Obama KNOWS his drunken Uncle.

Somehow he manages to have it both ways, Outer. Yes, every dollar taken from small business and given to others along with the rules and regulations makes things worse. Why can't they see that?

David Strickland spent years as a Democratic transportation aide on Capitol Hill, and then President Obama appointed him to a leading automobile role in the administration.

There, Strickland oversaw new regulations on fuel economy. He also oversaw an agency study that led to a $17 million fine against Toyota despite dubious evidence.

"It's hard to believe that he didn't know what someone on his staff was doing. We need a complete independent investigation of this and everyone involved should be subpoenaed to testify in front of them.

All the communications between his staff should also be subpoenaed and gone over by that same independent committee."

“First of all, it’s called the ‘Affordable Care Act,’ ” the California Democrat said after a reporter asked about House GOP efforts to try to tweak the law.
Democrats, who just a couple of years ago were happy to call President Obama’s signature achievement Obamacare, now are bristling at the name and have tried to remove it from the political lexicon.

The change comes as the law’s rollout has been rocky, leaving Americans sour.

On Thursday, at her weekly press conference, Mrs. Pelosi was asked by a reporter whether Democrats would vote with Republicans to impose new privacy safeguards in health care, and if so, whether that would be a signal Democrats are worried about the politics of the law.

The Justice Department appointed a political supporter of President Obama who has donated to his re-election efforts to head its criminal investigation into the Internal Revenue Service's targeting of conservative groups seeking tax-exempt status.

House Oversight and Government Reform Committee Chairman Darrell Issa, R-Calif., and Rep. Jim Jordan, R-Ohio, a member of the panel, said Thursday they discovered that Barbara Bosserman, a DOJ trial attorney now spearheading the department's investigation of the IRS targeting, has donated at least $6,750 to Obama's election campaigns and the Democratic National Committee over the last several years.

Issa and Jordan wrote a letter to Attorney General Eric Holder, pointing out the conflict of interest and urging Bosserman's immediate removal from the ongoing IRS probe.

“By selecting a significant donor to President Obama to lead an investigation into the inappropriate targeting of conservative groups the department has created a startling conflict of interest,” they wrote.

“It is unbelievable that the Department would choose such an individual to examine the federal government's systematic targeting and harassment of organizations opposed to the President's policies," they continued. "At the very least, Ms. Bosserman's involvement is highly inappropriate and has compromised the Administration's investigation of the IRS."

A cursory search of Federal Election Commission records on the nonprofit Center for Responsive Politics' www.opensecrets.org found a total of $4,250 donations to Obama or the DNC since 2008. The majority of those donations - $3,600 - went directly to Obama's presidential campaign with another $650 going to the DNC.

There was a party in the East Room of the White House Saturday night, an affair attended by a reported 500 people, a lavish celebration with celebrities galore, appearances by some of the world's most popular performers, lots of dancing and powerful government officials, including, of course, the most powerful official of all, the President of the United States. And the White House wants to make sure you know as little as possible about it.

It's not easy to enforce discipline on successful, wealthy, and famous people used to having their own way. But the White House apparently did not want to see photos of the first lady's glittery gala circulating around the Internet. So it imposed a strict rule: No cellphones. "Guests were told not to bring cellphones with them, and there was a cellphone check-in area for those who did," reported the Chicago Tribune. "Signs at the party told guests: No cellphones, no social media." People magazine added: "Guests had been greeted by a 'cell phone check' table where they deposited their camera phones on arrival and it was understood that this was not an occasion for Tweeting party photos or Facebooking details." The publications cited sources who insisted on anonymity for fear of White House reprisal. 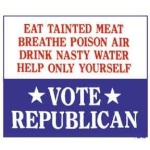 I have heard very little about the party. Thanks for posting.

They don't care how much of our money they spend.