Don We Now Our Gay Apparal...

Don We Now Our Gay Apparal... 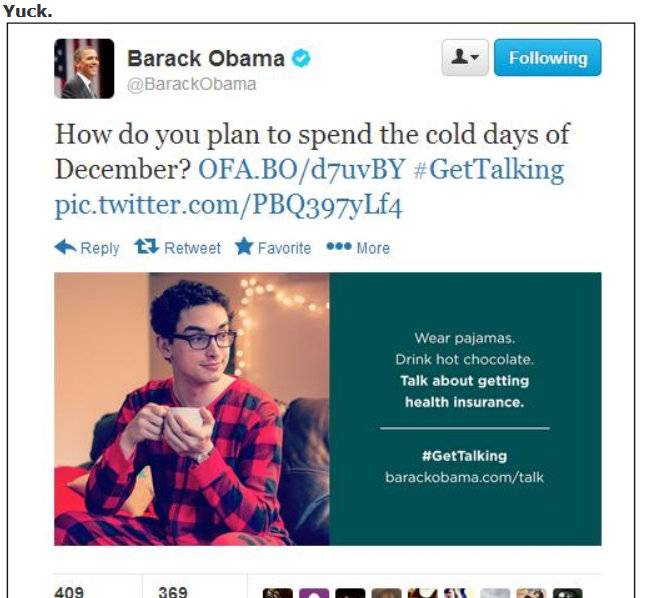 Isn't that one of the stupidest things you ever saw????

The left really thinks the rest of us are idiots. Who the hell do they think is going to follow any of their suggestions?

WHL wrote:Isn't that one of the stupidest things you ever saw????

IF DemocratCare was so good, would they need to advertise it?

If you need such information, just go to their website...!

This thread made me ROFL.

This is going to cost The Marxists in Washington some major vote counts...

"The suspension of Phil Robertson from A&E’s Duck Dynasty is outrageous in a nation that values freedom, according to social critic and openly gay, dissident feminist Camille Paglia.

“I speak with authority here, because I was openly gay before the ‘Stonewall rebellion,’ when it cost you something to be so. And I personally feel as a libertarian that people have the right to free thought and free speech,” Paglia, a professor at the University of the Arts in Philadelphia, said on Laura Ingraham’s radio show Thursday.

“In a democratic country, people have the right to be homophobic as well as they have the right to support homosexuality — as I one hundred percent do. If people are basing their views against gays on the Bible, again they have a right of religious freedom there,” she added

Robertson has been suspended from Duck Dynasty due to comments he made to GQ that have been deemed “anti-gay.” According to Paglia, the culture has become too politically correct.

“To express yourself in a magazine in an interview — this is the level of punitive PC, utterly fascist, utterly Stalinist, OK, that my liberal colleagues in the Democratic Party and on college campuses have supported and promoted over the last several decades,” Paglia said. “This is the whole legacy of free speech 1960’s that have been lost by my own party.”

Paglia went on to point out that while she is an atheist she respects religion and has been frustrated by the intolerance of gay activists.

“I think that this intolerance by gay activists toward the full spectrum of human beliefs is a sign of immaturity, juvenility,” Paglia said. “This is not the mark of a true intellectual life. This is why there is no cultural life now in the U.S. Why nothing is of interest coming from the major media in terms of cultural criticism. Why the graduates of the Ivy League with their A, A, A+ grades are complete cultural illiterates, etc. is because they are not being educated in any way to give respect to opposing view points.”

Has there EVER been such Intellectual Honesty seen before?

MVP pulled out of NH in the last couple of months. One of the few health insurance companies we had left.

“Someone like Pajama Boy ended up the poster boy for massive wealth redistribution and government intervention into the personal lives of its citizens after being raised in a privileged environment populated by people who reject such naive, idealistic notions in the practice of their everyday lives and careers,” Moeller said. “Very few successful people can afford to actually 'live out' liberalism’s fiscal policies. The math doesn’t add up.”

Someone like Krupp ended up the way he did because, as Moeller explained, the basic tenets of humanity — caring for one’s fellow man — stuck with even the privileged children of New Trier, but the “parental hand-washing” of passing the duties on to someone else were taught to them at the school.

And that’s a commentary on the liberal mind. Instead of teaching people to help each other, the ever-present government is the one to help. It’s not enough that people donate to charities, they must donate to the government charities (which are inefficient) as well.

Ethan Krupp was not just the face of the latest Obamacare campaign: He was the face of so-called limousine liberals everywhere.