How is Libya Doing Since Obama Saved the Country?

How is Libya Doing Since Obama Saved the Country?

Now it appears that Libya's neighbor, Egypt, will intervene against the "Rebels" who are destroying Libya's infrastructure after Obama's ill-advised bombing attacks.
—Al Arabiya

A statement shown on screen on An-Nabaa television, regarded as close to the Islamists, said: "Fajr Libya announces that it totally controls Tripoli international airport."

Earlier on Saturday, leaders of the Islamist coalition, partly comprising men from Misrata, east of Tripoli, said their forces were advancing on the airport, having taken a bridge and a military base. The strategic site 30 kilometres (20 miles) south of the Libyan capital, has been shut since July 13 amid skirmishes between the Islamists and the Zintan force, allies of rogue general Khalifa Haftar, based at Benghazi in eastern Libya and hostile to the Islamists.

I'm so glad Obama got rid of Gaddafi. The world is a better place.

Clear to everyone now that Obama backed the islamic State. (ISIS)

Fire destroyed the terminal at Tripoli's main airport on Sunday, one day after it was seized by militia fighters from the Libyan city of Misrata, witnesses said.

Unidentified war planes also attacked targets in the capital, residents said, the latest stage of the worst fighting in Libya since the overthrow of Muammar Gaddafi in 2011.

Libya's Islamists have blamed the air strikes on Egypt and the United Arab Emirates, two countries which have cracked down on Islamists.

But of course, this was reported on your TV.

Video shows that Libya was the most advanced country in the continent of Africa—where support of ISIS came from—to reduce it to another third world country:

The U.S. State Department issued a travel warning for Libya on Tuesday, overriding the previous warning issued in July 2014.

In July, the U.S. embassy suspended all operations in Libya and relocated staff due to “ongoing violence between Libyan militias in the immediate vicinity of the Embassy.” On Tuesday, the State Department said that “the security situation in Libya remains unpredictable and unstable.”

Pointing to the inability of the Libyan government to “adequately build its military and police forces and improve security following the 2011 revolution,” the State Department said that crime levels remain high and various groups have called for attacks against U.S. citizens and U.S. interests within the country. Any American citizens in Libya “should exercise extreme caution and depart immediately,” the department said.

Additionally, U.S. mariners in the area are urged to operate with extreme caution near Libyan waters or when approaching Libyan oil terminals and ports.
kticradio.com ...

Funny that they waited until TWO hours after the Obama's address, huh?

Seen what the Arab Spring has done to the graves of Britain's WWII war dead?

What a Weak President Can Do for the World...

UN envoy: Yemen is being pushed ‘to the edge of civil war’

The U.N. special envoy for Yemen warned an emergency meeting of the U.N. Security Council on Sunday that events appear to be leading the Arab country “to the edge of civil war” and urged all parties to step back from the brink and resolve the conflict peacefully.
Associated Press

Civil War in Yemen
Civil War in Ukraine
Civil War in Syria
Civil War in Libya
Civil War starting in Tunisia
Civil War narrowly averted in Egypt (Muslim Brotherhood kicked out)
Outright war between Israel and HAMAS in the Gaza Strip
ISIL invading Iraq,
Iran taking tighter control of Southern Iraq
Civil War in Afghanistan
Takeover of Crimea by Russia
Chinese aggression in the South China Sea
Meltdown in North Korea
Takeover of secular Turkey by Islamic extremists connected to the Muslim Brotherhood
Deteriorating situation in Pakistan.
Pentagon is unable to account for more than $500 million in U.S. military aid given to Yemen amid fears that the weaponry, aircraft and equipment is at risk of being seized by Iranian-backed rebels or al-Qaeda...
Iran is showing off an apparently armed drone taking a bead on a ship crossing the Strait of Hormuz...


Yemen's US presence told to "run away".

Oh boy, wait 'til Obama reads about this in the New York Times this morning—he's going to be angry! 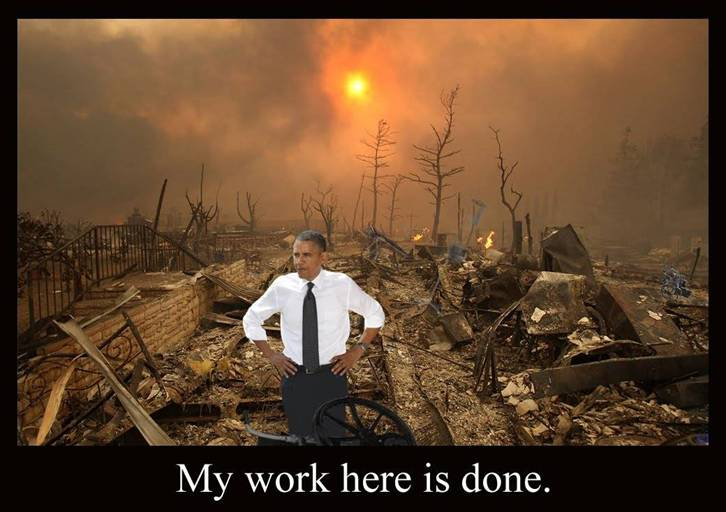 Let's just hope when he is out of office that we don't vote in another one like him. If we do I feel so sorry for future generations.