Still cheerleading for team Obama while the stands are empty and the game is over 52-45?


"The scale of the defeats, taken together, was breathtaking: a Senate majority lost, over a dozen House seats swept away, and Democrats ousted from governors’ mansions across the country. The drubbing is sure to spark a round of soul-searching as Democrats ponder whether President Obama is to blame — or whether something deeper has gone wrong in the party that could threaten its chances of retaining the White House in 2016."

The day after Clinton was chastised with Congressional defeat back in 94, He held a press conference and said to the electorate:

He stopped trying to force leftist policies on an unwilling population.

Does anyone think there's any chance Obama will do that? I don’t believe so but I truly hope I am wrong.  I believe he will keep signing executive orders that only the far left and leeches support.

After last night, it is pretty clear (to most people) that Americans believe it is the Democrats that are mostly responsible for this mess.  That is why so many have been fired.

Things will change, we no longer have a crook in the Senate covering Obama’s backside.

As to your statement that Republicans will be responsible for gridlock, not a chance.  The tables are turned (see the scoreboard).  If the gridlock remains it will be Democrats and Obama blocking legislation. Obama will have to publically VETO legislation.

With the filibuster and the presidential veto your scoreboard doesn't man a hill of beans. The House didn't give Obama anything and the Senate filibustered almost everything, so do you really think Obama is going to say I heard you??? You are truly delusional if you believe that. I can't wait for Obama's executive order on immigration. That should work the Republicans up into a frenzy!!! Maybe they'll sue him again. Oh, wait a minute, they never sued him the first time!!

That is a pleasant surprise….  Not really

Apparently Obama is now willing to work with the Republican Majorities as long as they do exactly what he wants, otherwise he has got his magic pen.

"I'm not going to try to read the tea leaves of election results, I'm going to continue to advance what I think is best for the country."And

There it is. He just admitted it.

Obama's conversation with McConnell must have gone very badly. He will not begin working with republicans in good faith and that he'll continue burning bridges.

The press is actually did their job today, they are going for the jugular. About damn time.

It wasn’t Congressional Republicans that sent him the message, it was We The People.  The incorrect response would be ignoring that message.

The citizens of this country overwhelmingly oppose amnesty.  Considering the shellacking the Democrat's just received, passing amnesty would represent the ultimate act of arrogance and defying the will of the people.  Make no mistake; this single action will be the stake in the heart of the Democratic Party.

News Buzzard wrote:"...The pundits already figure that Hillary has a lock on 245 electoral votes in 2016..." 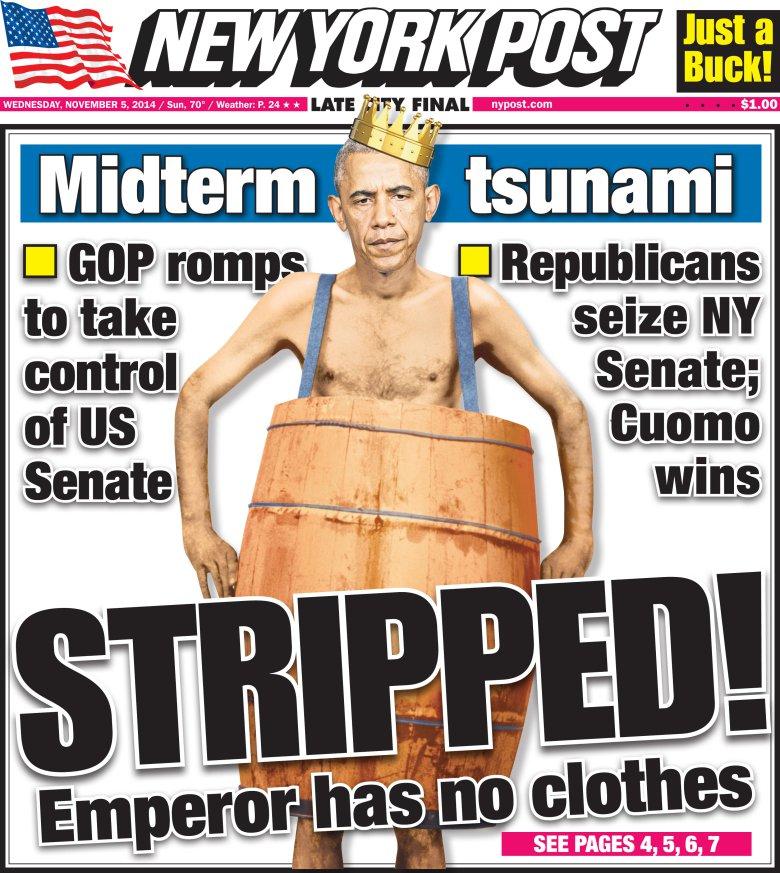 NB will never stopped cheering for his team, even after they lose!!

Republicans now have the House, Senate and Executive Council in New Hampshire. The Governor is still a Democrat. She won’t be able to do much further damage.

News Buzzard wrote:"...The pundits already figure that Hillary has a lock on 245 electoral votes in 2016..."

Do you need a tissue?

The Democrats just got spanked. I know its difficult, and it’s painful but get over it.

Your Hillary spin is comical and based on the fact Democrats think minorities are stupid and will automatically vote Democrat.

The Clintons went to Arkansas to campaign and their candidate lost by 16 percentage points.

The Clintons and the Obamas went to Wisconsin to campaign against Scott Walker. Walker won anyway.

They couldn't even assure a victory in Clinton’s home state. They couldn’t defeat Walker in three atempts. What in the world are you smoking to think that Hillary can win anything at this point?

Yes, Wisconsin, a state where NB was sure would go Democrat.  Did you not keep saying Walker was done, NB?

Yes, thankfully it looks like the NH House and Senate will both be Republican.

Wisconsin and Kansas will be broke in about 2 years. Stay tuned for Obama's executive order on immigration!

News Buzzard
I was Mitch McConnell I wouldn't get too comfortable in the leader's seat. The pundits already figure that Hillary has a lock on 245 electoral votes in 2016 so it shouldn't take too much for her to win, and with the Republicans holding a gerrymandered House it will probably mean 8 more years of gridlock. That's the disastrous result of the rise of the Tea Party!!

You're right, and the Party Of No will stay on course!

obervantone wrote:"...That's the disastrous result of the rise of the Tea Party...!!"

Speaking of the TEA Party, here are the winners:

Jody Hice (GA-10) - Succeeding Broun, this guy is infuriating Democrats who are calling him 'the most evil republican of 2014!'... so you know he's solid gold! Easily won in the deep red district and has said he wont vote for Boehner.

Mia Love (UT-4) - Early Tea Party favorite, after much struggle, she is IN!

David Rouzer (NC-7) - Been waiting to come to congress for a while, this was his year. Replaced retiring blue dog Democrat Mike McIntyre.

Bruce Poliquinn (ME-2) - A very conservative candidate who won the primary in an upset. Establishment though he'd lose. He didn't.

Mike Bost (IL-12) - Dubbed Meltdown Mike for his explosive defenses of the 2nd Amendment on the floor of the state house, he is going to be giving as much hell to the democrats and RINOS as Stockman did.

Johnny Tacherra (CA-16)??? - Seems on course to unseat Democrat incumbent Jim Costa in an upset nobody saw coming. He comes out of the Tim Donnelly school of California right wing thought.

The GOP won at every level-one of the most radical ideological shifts in this nation’s history:

If the libs don't like them, they must be good!!

I do get a chuckle out of blue and red maps like this because sure...most of the map is red, but where most of the people live is blue. Cows don't vote..or perhaps that is where all this voter fraud the republicans talk about is coming from, herds of cattle heading to the polls!

obervantone wrote:I do get a chuckle out of blue and red maps like this because sure...most of the map is red, but where most of the people live is blue.   Cows don't vote..or perhaps that is where all this voter fraud the republicans talk about is coming from, herds of cattle heading to the polls!

News Buzzard wrote:"The pundits already figure that Hillary has a lock on 245 electoral votes in 2016 so it shouldn't take too much for her to win..."

"...True, it’s not like they have a deep bench of talent in that party. Hillary isn’t much to begin with as a presidential candidate but after her it gets even worse. You’re left with Joe Biden, Elizabeth Warren, Andrew Cuomo, Martin O’Malley, Deval Patrick, and maybe Cory Booker as the alternatives to Hillary. That’s slim pickings..."

Keep telling yourself that!

News Buzzard wrote:Keep telling yourself that!

Weakness throughout the party? 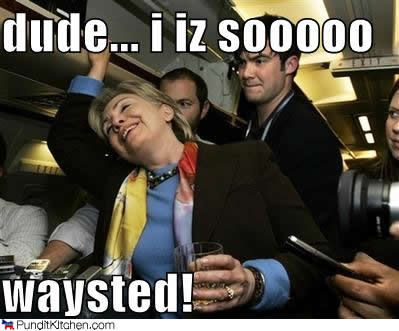