The window for signups closes on Sunday!

How many actually "have skin in the game"?

News Hawk wrote:How many actually "have skin in the game"?

News Hawk wrote:How many actually "have skin in the game"?

How many enrollees are currently paid up, so they actually have skin in the game? 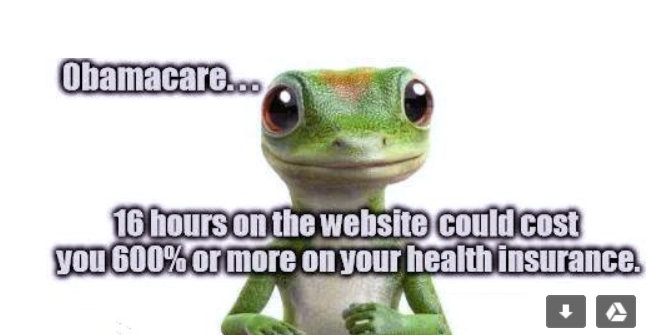 Only 10 million signed up? Wasn’t the goal 13 million by now?

Wasn’t Obamacare created to cover 37 million who were reported to be uninsured?

Sounds great until you learn that our government police state coerces you via a punitive mandate to buy into Obamacare, then charges your neighbor to cover your welfare subsidy.

When you have a gun pointed at your head by the IRS and HHS, it’s hard to look at this as progress.

I have to pay back my Obamacare subsidy.

Janice Riddle got a nasty surprise when she filled out her tax return this year.

The Los Angeles resident had applied for Obamacare in late 2013, when she was unemployed. She qualified for a hefty subsidy of $470 a month, leaving her with a monthly premium of $1 for the cheapest plan available.

Riddle landed a job in early 2014 at a life insurance agency, but since her new employer didn't offer health benefits, she kept her Obamacare plan. However, she didn't update her income ...

Now, she has to pay back the entire subsidy, which is forcing her to dip into her savings.

Early data is in from some tax preparers. Some 53% of Jackson Hewitt clients who received subsidies have to repay part or all of it, with the largest being $12,000, said Mark Steber, chief tax officer. The rest overestimated their income so they are getting even larger refunds.

Erica Cherington, 32, was "very happy" to enroll in Obamacare last year so she could address some health issues. She only had to pay $89 a month for a Horizon Blue Cross Blue Shield plan, thanks to a $284 monthly subsidy. She let herself be automatically re-enrolled for 2015.

To avoid this happening again, Cherington called the federal exchange to update her income, which she hadn't done when she changed jobs. Her revised monthly premium: $156 a month.

A case manager who handles disability payments, Cherington is now considering dropping her coverage and paying the penalty instead.

"It's not really affordable," she said of her new premium. "I don't know if I'll be able to keep it."
—CNN Money

Who wouldn't enroll? With the threat of fines or the promise of free or almost free healthcare (paid for by others of course) I am not at all surprised people signed up.


Only weeks after leaving office on January 20, 2017, former president Barack Hussein Obama discovers a leak under his sink, so he calls Joe the Plumber to come out and fix it.  Joe drives to Obama's new house, which is located in a very exclusive, gated community near Chicago, where all the residents have a net income of more than $250,000 per year.

Joe arrives and takes his tools into the house.  Joe is led to the guest bathroom that contains the leaky pipe under the sink.  Joe assesses the problem and tells Obama that it's an easy repair that will take less than 10 minutes.  Obama asks Joe how much it will  cost.  Joe checks his rate chart and says, "$9,500."

"What?!  $9,500?" Obama asks, stunned, "But you  said it's an easy repair  Michelle will whup my ass if I pay a plumber that much!"
Joe says, "Yes, but what I do is charge those who make $250,000 per year a much higher amount so I can fix the plumbing of poorer people for free," explains Joe."This has always been my philosophy.  As a matter of fact, I lobbied the Democrat Congress, who passed this  philosophy into law. Now all plumbers must do business this way.  It's known as 'Affordable Plumbing Act of 2014 '  I'm surprised you haven't heard of it."

In spite of that, Obama tells Joe there's no way he's paying that much for a small  plumbing repair, so Joe leaves.  Obama spends the next hour flipping through the Chicago phone book calling for another plumber, but he finds that all other plumbing businesses in the area have gone out of business. Not wanting to pay Joe's price, Obama does nothing and the leak goes unrepaired for several more days.  A week later the leak is so bad that Obama has had to put a bucket under the sink.  Michelle is not happy as she has Oprah and guests arriving the next morning.  The bucket fills up quickly and has to be emptied every hour and there's a risk that the room will flood, so Obama calls Joe again and pleads with him to return.

Obama quickly fires back, "What! A few days ago you told me it would cost $9,500!"
Joe explains, "Well, because of the 'Affordable Plumbing Act ,' a lot of wealthier people are learning how to maintain and take care of their own plumbing, so there are fewer payers into the plumbing exchanges.  As a result, the price I have to charge wealthy people like you keeps  rising. Not only that, but for some reason the demand for plumbing work by those who get it for free has skyrocketed!  There's a long waiting list of those who need repairs but the amount we get doesn't cover our costs.  This unfortunately has put a lot of my fellow plumbers out of business, they're not being replaced, and nobody is  going into the plumbing business because they know they can't make any money at it.  I'm hurting, too, all thanks to greedy rich people like you who won't pay their fair share."

Perfect! But the Dems don't understand that.

The LA Times reported that illegal aliens are unhappy that not enough doctors speak Spanish. The [LA Times] article never used the words "illegal" or "undocumented" or "dreamer" or "super virtuous" or however we are to call illegal aliens nowadays; only referring to "Hispanics" who can't understand English. But since all citizens understand English, or should, I presume that the article is only talking about illegal aliens. Now let the sob story begin:

Some have neglected their health because they're flummoxed or alienated by the medical system, Dr. Gloria Sanchez believes.

The illegal aliens are... alienated! How ironic is that! They are also flummoxed! Have you ever seen an illegal alien flummoxed? If we put up a double layer fence across the US Mexico border, I do believe we'd see a lot of them flummoxed!

Irma Torres, 75, remembered one conversation with her 70-year-old husband, Miguel, when he was hospitalized for a heart condition.

Don't you hate it when you invade another country and when you seek out free medical care, they don't speak your language???
American Thinker

Sumpin' not right with our borders situation...