Examples of waste for 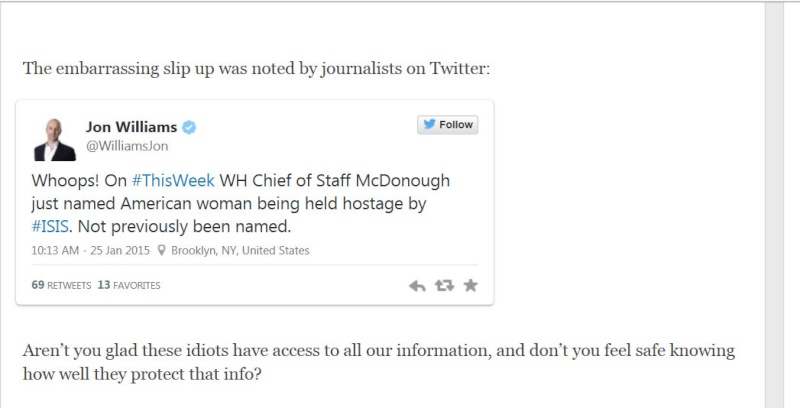 Now, of course, the FedGov's employee database—including SS# and those with Top Secret clearances—has now been hacked!

They are supposed to be doctor's offices, clinics or hospitals, not hamburger stands, vacant lots and mailbox shops, but that's what some of the 23,400 potentially fake or bad addresses on Medicare's list of health care providers are, according to a report released today to Congress from the U.S. Government Accountability Office (GAO).

The report says that the Centers for Medicare and Medicaid Services (CMS), the federal agency that administers Medicare, estimates that last year some $60 billion of American taxpayer money, or more than 10 percent of Medicare’s total budget, was lost to fraud, waste, abuse and improper payments.

The gov has no control at all. It is pathetic. I am surprised when they (it does) do anything right.

Speaking of Medicare, those needing hip- and knee- replacement, better hurry up. The Medicare they'd paid into is cutting back severely in payments, beginning SOON.

What? Are they going to stop paying for hips and knees now? No surprise.

WHL wrote:What?   Are they going to stop paying for hips and knees now?  No surprise.

It's the health care rationing we've been warning about!

Yesterday, Congress requested more information about a July 18 explosion in one of the buildings operated by the National Institute of Standards and Technology outside Washington, D.C. There’s reason for Congress to raise an eyebrow; based on evidence collected at the scene, investigators suspect that the room was being used to develop illegal methamphetamines.

The explosion occurred in NIST Building 236, far from the majority of the labs, so it didn’t damage any research endeavors. It happened in a room that had been emptied of equipment, as one experiment had recently ended and another was slated to begin. The blast occurred on a Saturday, so luckily few employees were around, but it did injure a security guard who was on duty. (He quit his job the day after the incident.)

So the question on everyone’s mind is: how was there a meth lab in a government building, and who was operating it? Paul Starks, a spokesman for the local Montgomery County police, would not comment on whether any chemicals or equipment used to make the drugs were found on the property. But NBC Washington reports that the security guard was found with burns on his arms and hands, igniting suspicion that he might have been involved in making the meth.

But Congress is worried. “The fact that this explosion took place at a taxpayer-funded NIST facility, potentially endangering NIST employees, is of great concern,” says Lamar S. Smith, a congressmen from Texas and chairman of the Science, Space & Technology Committee in the U.S. House of Representatives told Chemical and Engineering News. “I am troubled by the allegations that such dangerous and illicit activity went undetected at a federal research facility.”

The local Montgomery County Police Department is investigating the incident, along with the federal Drug Enforcement Administration. So far there have been no arrests and the investigation is ongoing.
Popular Science

Meth labs blow up—that's what they've been doing for decades.

This one's in a US Government building!

So did you actually hear that they are now rationing knees and hips etc. already? Nice!!

WHL wrote:So did you actually hear that they are now rationing knees and hips etc. already?  Nice!!

For those who have paid into Medicare, you will be receiving the best of discounted knees and hip hardware.

Medicare and Medicaid At 50: One Is Going Bankrupt, the Other Is Bankrupting States

When President Johnson signed Medicare into law on June 30, 1965, he said , "If it has a few defects, I am confident those can be quickly remedied."

Government programs—except taxpayers "bought into it"!

The saddest thing about it, is they do nothing. They find it and let it continue.

Feds crack down on check-cashing stores in South Florida

For a very fat fee, South Florida check-cashing businesses have routinely turned a blind eye to criminals who use fake IDs to cash millions of dollars in fraudulently obtained tax-refund checks from the U.S. Treasury Department, authorities say.

Now, the government hopes to put an end to the racket by requiring 760 check cashers in Miami-Dade and Broward counties to obtain additional personal information from all customers if they want to cash a refund check in excess of $1,000.

The check-cashing crackdown — which takes effect Monday and is the first in the nation — aims to help the Internal Revenue Service punish bad businesses and save taxpayers millions. It’s being imposed during the off-tax season because that is when criminals often try to cash ill-gotten refund checks issued in other people’s stolen names.

“We are putting the check cashers on notice that if they continue to do this, they will be prosecuted,” said Kelly Jackson, special agent in charge of IRS criminal investigations in South Florida. “We hope to stop the bad people and put them in jail and protect tax revenue.”

Among the new requirements: a copy of the customer’s identification, such as a driver’s license or passport, matching the name on the refund check. Also required: a digital photo taken of the customer at the time of the transaction that matches the one on the ID and the customer’s phone number."
(Excerpt) Read more at miamiherald.com ...

In the 11th hour of a eight-year reign!

EPA spill: 'The magnitude of it, you can't even describe it'

The city of Durango and La Plata County, Colorado, have declared a state of emergency after a federal cleanup crew accidentally released mine waste into the water.

An estimated 1 million gallons of waste water spilled out of an abandoned mine area in the southern part of the state last week, turning the Animas River orange and prompting the Environmental Protection Agency to tell locals to avoid it.

According to the EPA, the spill occurred when one of its teams was using heavy equipment to enter the Gold King Mine, a suspended mine near Durango. Instead of entering the mine and beginning the process of pumping and treating the contaminated water inside as planned, the team accidentally caused it to flow into the nearby Animas River.
CNN You might have to work a little harder to pay for it, but it's progress. Of some horrible sort.

The National Endowment for the Arts gave $60,000 for the production of a play about the first openly gay president of the United States who has to fight zombies in the basement, and who has a cheating First Man.

“The year is 2063 and Thom Valentine, the first openly gay President of the United States, faces a host of problems,” reads the Woolley Mammoth Theater Company’s description of the play. “An imminent civil war, the threat of an African invasion, an adulterous First Gentleman, and zombies in the basement of the White House!”

You can always count on the NEA to waste money on unimaginably ridiculous garbage. As long as it's anti-American.
Frontpage Mag

It's OUR Money, and what is Government doing with it?


O’Hara and his director, Howard Shalwitz, cycle through multiple acts of carnage, shady diplomatic doings and pointlessly graphic sex scenes, all leading to a finger-wagging ending about America’s sins. We’ve been bad, you and I. The zombies, it seems, are us.

Here's a question, why do we continue to fund the NEA?

We've been talking about this for decades. The NEA has burned through billions of dollars. It continues funding anti-American garbage while stealing money from working people.

Give Up TV or Become Group-Think Zombies...

"You might think this this sounds like propaganda and politics and terrible television. But, it doesn’t have to be any of those, says Neal Baer, executive producer of “Under the Dome” and former writer for “ER” and “Law and Order SVU.”  “There’s a difference between actors talking about what their political views are and a television show taking seriously all the strands of the conflict,” says Baer.

Does that mean they will show the frustration of  people trying to enroll at the ObamaCrash site, and the sticker shocked horror of other people when they find out their premiums have shot up? "
http://www.breitbart.com/blog/2013/10/11/hollywood-gets-a-500k-grant-to-weave-obamacare-into-tv-storylines/

Half a million of taxpayer dollars to sneak Obamacare propaganda into your TV shows.

Hasan F. Ahmed used his position owning Associated Discount Foods to manipulate the food stamp system. He was able to scam it for an estimated $5,243,866 in benefits between July 2011 and June 2014. He allowed food stamp recipients to trade their benefits for cash at a discounted rate, then took government reimbursements on those stamps at the full rate.

Ahmed pleaded guilty to one count of food stamp fraud and four counts of money laundering, additionally one count of tax evasion, and one count of structuring bank transactions, according to the local Fox News affiliate. He filed a tax return in 2013 claiming a total income of $24,728 despite his actual income being $210,927. Ahmed has agreed to forfeit $5.2 million to the government.
Read more: http://dailycaller.com/2016/03/09/feds-put-kibosh-on-convenience-stores-5-2m-food-stamp-swindling/#ixzz42SVdHCNn

Did you hear that His Majesty King Obama and wife and family brought along a smaller plane on their trip which isn't unusual. What IS unusual is that they are going on a family excursion in the smaller plane. RUKidding me? I can't wait until these people are out of there. Who do they think they are?

Well, why not? That second plane was "free".

Of course, the whole trip was free to him. We paid for it. He will get as many family trips in as he can before he is done. Just wait and see.

Minnesota giving away taxpayer money to spend $100 on "shotguns".

With just three of these "shotguns"—made out of hardware store pipe and wood—a doper can buy a real firearm!