Jihadi John apologizes to his family for having his identity revealed, but not for beheadings 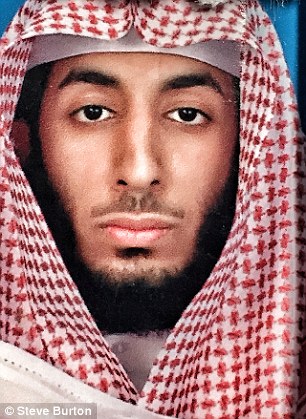 Mohammed Emwazi has apologised to his parents for bringing shame to the family after being unmasked as ISIS butcher 'Jihadi John'.

But the 26-year-old executioner, who has murdered a number of western hostages, including two British aid workers, has not expressed any remorse for the barbaric killings.

Emwazi's family have been forced into hiding since his identity was revealed.

The Sunday Times reports that Emwazi had sent an apology via a third party for the 'problems and trouble the revelation of his identity has caused'.

In the Islamic faith it is believed that those who disobey or disrespect their parents are more likely to go to hell.

Kuwaiti MPs have told Emwazi's father, Jasem, to publicly distance himself from his son's actions by apologising – or leave the country.

Kuwaitis have become increasingly frustrated with the mixed messages coming from 51-year-old British citizen Mr Emwazi, whose family are said to have cost the British tax-payer up to £400,000 in the 20 years they have lived in the UK.

Last week, Mr Emwazi told former workmates his son was a 'dog' and hoped he would die.

Meanwhile, both Illegals and "deported-Illegals" continue to stream across US open borders. Those who fight for ISIS are returning to the US without difficulty.

And we're all going to die from EBOLA!!

News Buzzard wrote:And we're all going to die from EBOLA!!

This article came out eleven weeks after the November election. Was the MSM running the story to deflect from the issues surrounding Obama's mishandling of everything he touched?

Death of the Ebola Epidemic and the Lessons Unlearned

President Obama signed into law $5.4 billion in funding for what was already a phantom epidemic

“It was impossible to predict the decline in the Ebola caseload last September, when the U.S. Centers for Disease Control and Prevention (CDC) suggested a worst-case scenario of 1.4 million victims in West Africa.” That from the Washington Post, January 18, in an article on Ebola treatment centers standing empty even as new ones are being built. Fewer than 22,000 cases have been reported and new cases are approaching zero.

“Impossible?” I predicted it and repeated it over and over, in multiple major publications. In August I predicted the forthcoming hysteria in one of America’s highest-circulation newspapers, the New York Post. The next month, in the science and medical journal Inference, I explained in tremendous detail why the predictions were clearly false even when they first appeared. Weeks later Forbes ran my article “Despite World Panic, The Rate of New Ebola Infections Is Already Slowing Down.”
Canada Free Press, Michael Fumento

Probably was. Obama learned well from the Clintons how to divert attention from his poor job performance.