Hi troops, miss me?  Apparently you have since this site now appears to go months without a new post....oh well

But wait, Mr Wizard, wasn't the speed limit supposed to end all the problems on the water?

Well little squirrel, that's the fabrication that those powerboat haters spread, but as you can see it is not true.

See you next year.  Out.

Well little squirrel...but again where is the breakdown for your stats that include all of NH's 1000 plus lakes AND the ocean? Talk about fuzzy math! Are you sayng a SL on Winni was supposed to end boating accidents all over the state? And was the SL supposed to end accidents caused by wake jumping jet skiers, irresponsible tubers, hapless fishermen, and skiers injured by boats going in reverse (that one actually happened)? So show us the Winnipesaukee data.

Well, I didn't think anybody even bothered to check this forum any more. But I guess somebody does.

There's a new boat on The Big Lake: it has four huge outboards, and requires a six-wheel trailer to allow it to "visit" Winnipesaukee. 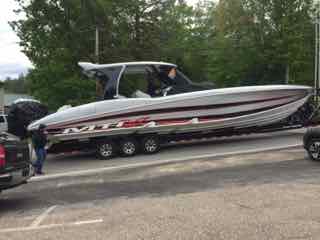 Even the trailer is oversized. 'Wonder where the owner has found the space to park it?

Four hundred gallons of gasoline on board.

Does that work out to a gallon a minute?

Will the NHMP give him a pass WRT the speed limits?

But wait, Mr Wizard, wasn't the speed limit supposed to end all the problems on the water?

The speed limit was supposed to end all the high-speed fatalities on the water.

Meanwhile, what happened to this year's bill to raise Winnipesaukee's speed limit from 45-25 to ummm…ummm... something higher?