It's safe to take your snowmobile for a ride, except maybe... 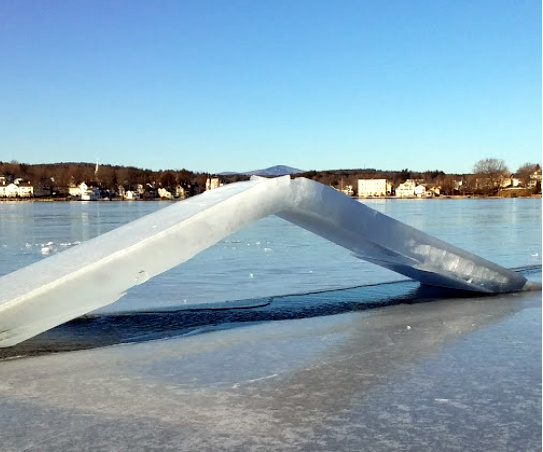 Is that an ice ridge?  Where is it? Oh I see downtown Wolfeboro.

It's not my picture, but I suspect it's a snowmobile trail across the ice. Yes, Wolfeboro Bay.

Likely, multiple passes by people who can trust that the ice is thick where previous sled trails can be followed.

Ice ridges are a major disruption across a stressed area of "open lake" ice. Mostly highly irregular in shape, or like this one, they can very large, and a real danger when motoring too fast during periods of poor contrast—white/mist/gray/fog. (Or during alcohol-affected behavior during snowmobile operation).

When I used to snowmobile on the lake, I remember some pretty good ridges in the broads. I hated going in the broads. I am scared of the ice. I really don't like it no matter how safe it is supposed to be.