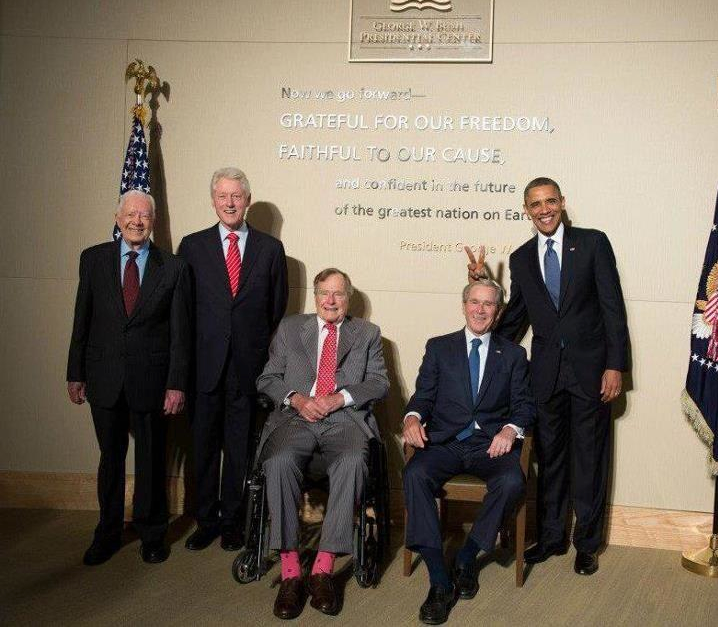 You're right. The Warmonger's wars spent us to near oblivion.

Why are there still troops there? I thought your buddy promised to pull them ALL out!!

They're there because your buddy started it.

That picture cracked me up Matzoh. Good one.

He's not my buddy. I never thought he was that great a president. I have said that lots of times before. I didn't like him getting us into all those wars, either.

Matzoh Heppelwhite. wrote:You're right. The Warmonger's wars spent us to near oblivion.

The damage from the 9/11 attack cost us over $1 Trillion dollars: it is unlikely that such a plan will be successful again. Like the Boston bombing, the attack was designed to kill American civilians.

However, no poison gas was used—and we know that Saddam Hussein had dipped into his stockpile for those rowdy Kurdish people. Thousands of Kurds died. I forget how many—but a lot!

Saddam had been shooting missiles at our aircraft that were enforcing sanctions under the aegis of the United Nations. His goal in attempting to shoot down Coalition aircraft? To parade an American pilot through the streets of Baghdad. With two recent wars against neighbors, Saddam has proven to be not such a nice guy, and could be expected to eventually finance an attack against the US homeland—or Israel.

Would he send Terrorists carrying a supply of his poison gas?

Sure, the Iraq Invasion was an expensive one, but we paid our own people. Much of the damaged Army equipment failed on its own. Eighty Abrams tanks failed, and none were failures caused by the Iraqi Army. The same can be said for much of our aircraft—helicopters in particular. If you subtract standard operational failures—which are always present, most of the expense was in salaries to our deserving troops.

Britain seemed to understand our angst regarding Saddam, and spent an amount commensurate with its activities in Iraq.

Since it is sufficient to use Saul Alinsky's Rules for Radicals against our former President, I don't expect a cogent reply.

fshnski wrote:That picture cracked me up Matzoh. Good one.

That Obama—he's such a clown!

Obama himself called the Afghan War:

"A War of Necessity".

Joe Biden called it "The most just war since WWII".

The highest-ranking foreign policy figures in the Obama administration—Hillary, Kerry, Hagel and Biden supported the war against Saddam.

Thinking about the Boston Bombings some more, it occurred to me that Russian Intelligence is superior to the Obama Administration's intelligence. It doesn't help that our enemies view the US as weak in resolve.

That's for sure-such short memories! That Obama IS just such a clown, isn't he???

Similar topics
» Get Your Photo with the Invaders...What Could Go Wrong?
» A fatal wait: Veterans languish and die on a VA hospital's secret list
» Spectrum Photo—Have They Moved?
» Photo of Jet-Skis BEHAVING...
» Barry's photo album