GOLDEN, Colo. – The federal government’s dream of a renewable energy empire hinges on a scrubby outpost here, where scientists and executives doggedly explore a

If you live outside Colorado, you probably haven’t heard of the National Renewable Energy Laboratory – NREL for short. It’s the place where solar panels, windmills and corn are deemed the energy source of the future and companies who support such endeavors are courted.

It’s also the place where highly paid staff decide how to spend hundreds of millions in taxpayer dollars.

And the public pays those decision-makers well: NREL’s top executive, Dr. Dan Arvizu, makes close to a million dollars per year. His two top lieutenants rake in more than half a million each and nine others make more than $350,000 a year.


Dan Arvizu
But what is really going on there? Energy expert Amy Oliver Cooke drove out to the site, which looks something like Nevada’s Area 51 with its remote location and forbidding concrete buildings. NREL had started a construction project and Cooke wanted to see for herself. She didn’t get far: a man in an SUV seemingly appeared out of nowhere, stopped her car, and told her to leave.

“A beefy looking fellow told me, ‘It’s top secret,’ said Cooke, director of the Energy Policy Center at the Independence Institute think tank. “I said, ‘I’m a taxpayer and I want to see what you’re building’ and he said it was it was ‘top secret so we can bring Americans a better future.’”

With its bloated budget and overseen by a $533 million a year government-funded management company, Cooke isn’t buying it.

“NREL has given us two of the most significant boondoggles, one of them being ethanol and the other being (bankrupt) Abound Solar,” she said. “They were part of the team that pushed Abound Solar along. In fact, they wrote in March 2011 on their website how proud they were of their role in abound solar.

“Am I impressed with NREL? No, not really,” she said.


Ed Perlmutter
NREL’s taxpayer-funded management company has seen its budget more than double since 2006. That’s when one of its most ardent supporters, Rep. Ed Perlmutter D-Lakewood, was first elected to Congress. The lab sits in the middle of his district.

But Perlmutter’s ties go beyond merely promoting green legislation and lobbying his colleagues for NREL funds. He has received $12,670 in campaign contributions from executives of NREL and its management company, MRIGlobal, a company that describes itself as “an independent, not-for-profit organization that performs contract research for government and industry.” Perlmuter’s father has served as a trustee for MRI and MRIGlobal during the past decade. Between 2003 and 2005, Perlmutter was also a trustee. These positions were unpaid.

Perlmutter did not respond to phone calls seeking comment for this story.

Funded by the U.S. Department of Energy, NREL started in 1977 as the Solar Energy Research Institute, a Jimmy Carter-era response to the 1973 Mideast oil crisis. Its budget, then about $100 million, was slashed during the Reagan era.

By the time Perlmutter was elected, NREL’s budget was $209.6 million. It increased steadily before ballooning to $536.5, a beneficiary of President Obama’s stimulus plan and a $135 million contract spread out over five years to construct a new science center. Its current $352 million budget is down slightly from last year’s $388.6 million.

From its inception, NREL has been managed by MRIGlobal, back then called the Midwest Research Institute.

To handle lab management, MRIGlobal partnered with Ohio-based Battelle Memorial Institute, which describes itself as “the world’s largest nonprofit research and development organization.” The pair formed Alliance for Sustainable Energy, a separate non-profit in 2008, for the sole purpose of managing NREL and installed NREL’s top executives as its directors.

Despite record federal debt, municipal bankruptcies and a nagging global recession, those executives enjoy pay packages that are out of reach of most Americans who pay their salaries. MRIGlobal and Alliance tax documents obtained by Watchdog show most earned well into six-figures:

The budget to manage Alliance is mind-boggling — and rising. For 2010, tax documents show, Alliance received $532.9 million from the Department of Energy, a whopping $189 million more than they were paid in 2008.

In 2010, MRIGlobal’s tax return shows DOE funding of $104.8 million, while Battelle’s tax return reported $4.55 billion in government grants. Its activities included management of five national laboratories (including NREL) and operating as subcontractor at a sixth.

However, at least one expert who has studied NREL doesn’t see any problem with the fact that the agency is overseen by a management company.

“I have no problems with the contractors operating the lab. They would do a much more efficient job than the government,” said Nick Loris, an energy policy analyst with the Heritage Foundation. “It should lower the cost of these projects.”

But what Loris doesn’t like is the entire concept of placing the government in a role of making energy affordable. That should be a job for the private sector.

“It’s not the government’s role to make energy cheaper. There is no reason the taxpayer should subsidize this,” he said. “We’ve seen the failures when the government gets involved in these projects. If they are going to be successful in the marketplace, they wouldn’t need help from the government”

In fact, the billions that have been siphoned into renewable energy have yet to produce a fraction of the promised return, Cooke claims.

Solar and wind still remain prohibitively expensive and not viable for general use as are corn and wood chips to fuel cars. Yet NREL labs continue to work to this end. Cooke predicts that numerous taxpayer-subsidized companies will go bankrupt in the coming years just as the overinflated housing market came crashing down.

And it’s not just the money, she said. It’s the environmental threat.


Solar companies have been fraught with bankruptcy
“I’ll tell you what’s pollution,” Cooke said. “It’s solar panels and wind turbines abandoned — things with toxic chemicals in them,” she said. “We don’t know what’s going to happen to these things. What do you do with a farm of abandoned wind turbines that are 500 feet tall?”

Despite its bloated stimulus funding, there are signs of financial trouble at NREL. The company offered to buy out 100 jobs when its budget dropped between 2011 and 2012.

“What about next year?” Oliver said. “Where does this stop?”

On his website, Perlmutter blamed Republicans for the cuts and claimed NREL generates 5,500 jobs. Its direct workforce is listed at 1,700.

By all accounts, Perlmutter’s relationship with NREL will continue. He spent two years trying to pass legislation to give solar companies a break with bankers before successfully adding the language to the American Clean Energy and Security Act of 2009.

He is co-chairman of the New Democrat Coalition Energy Task Force, part of the Financial Services Committee. Perlmutter has leveraged that role to keep alive a 20-year-old energy tax credit to producers of wind technology.

That credit would have expired at the end of the year. But the Financial Services Committee produced a bill to extend the credit for another year, which carries a cost of $12 billion over the next decade, The Hill reported. It faces stiff opposition from House Republicans.

Meanwhile, as energy expert Cooke predicts, the green business is still shaking out unsustainable ventures. The Danish wind company Vestas, which has several Colorado production sites, announced on Nov. 7 that it will shed 6,700 jobs through the end of next year.

“It is clean and it is the future of energy production,” Perlmutter wrote on his website. “Until the Tea Party took over this has always been a simple, noncontroversial tax credit.”

Contact Tori Richards at tori@coloradowatchdog.org and Earl Glynn at earl.glynn@franklincenterhq.org.

Wow, you are a fast typest.

sure is a lot of waste in gov

Guest wrote:Wow, you are a fast typest.

sure is a lot of waste in gov

There sure IS a lot of waste in gov.

I didn't type that. Sorry.

There's nothing appearing to select, "quote"...

I was a "Greenie" back in those days, so I paid for solar panel to heat my water in South Florida—and accepted a Government check for $1500, which paid for much of the gadget. A guy from India was the owner of the company.

A Cuban installed it.

'Should have been a slam-dunk, and it worked just fine for a few years, then a timer failed in the module—out of warrantee, of course.

I fixed that failure with a standard plug-in timer that operated the solar panel faithfully—if not particularly efficiently. The entire system survived a major hurricane, when a guy from Croatia repaired much of the damage.

Then I sold the place after eight years of contented solar hot water heating—the new owners tore all that copper, glass, and aluminum out, and piled it on the curb.

So where did Socialism's payback go?

"citer" is quote, NH if that is what you mean??

WHL wrote:"citer" is quote, NH if that is what you mean??

I see it presently, but nothing (at all) appeared earlier.

Thomas Sowell explains the empire-building mentality of government with a simple question:

“Back in my teaching days, many years ago, one of the things I liked to ask the class to consider was this: Imagine a government agency with only two tasks:

(1) building statues of Benedict Arnold and

If this agency’s budget were cut, what would it do?

“The example was deliberately extreme as an illustration. But, in the real world, the same general pattern can be seen in local, state and national government responses to budget cuts.”
http://townhall.com/columnists/thomassowell/2013/03/05/budget-politics-n1525553/page/full/ 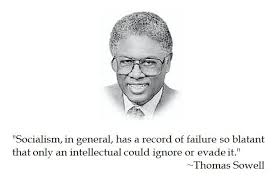 WHL wrote:"citer" is quote, NH if that is what you mean??

Now I think I expected to see it under my avatar, but I could have missed it 'way over there!

Good quote for this thread (stumbled upon):

As you keep saying the majority of voters are UNINFORMED.

WHL wrote:As you keep saying the majority of voters are UNINFORMED.

Does the following offer a better insight?

If instead, the Dims had run Oprah Winfrey, she would have
defeated Romney by an even greater margin.

"The U.S. Senate tried to save the Senate barber shop from being eliminated in the new budget bill Tuesday.

"Critics note the Senate barber shop lost three hundred and fifty thousand dollars last year. That makes it the most profitable agency in the U.S. government".