Nor' easter on the way?

WHL wrote:"...I know you and your liberal friends feel your way is right just as much as we do..."

They're  as wrong now as when their first Progressive hero, Woodrow Wilson, ran on his party's invented promise—as WWI was raging in Europe:

It's been 100 years since "their first Progressive hero, Woodrow Wilson" was in office and the world is still turning. How is that NH, why hasn't the world come to an end in over 100 years since that awful event.
You F**king DOOM and GLOOM A**H***!!!

They are wrong NH, and they will see it sometime when we become- as you are fond of saying-Detroit. Bt for now they need to dream and makes themselves feel good that they are helping some by taking the money of others.

"If someone shouts “destruction” and “democrat” into a person’s ear enough times, then the white matter makes that physical connection between the two grey matter parts of their brain that store those concepts. Smile = Happy, Frown = Sad, Democrats = Angry.

These connections are the first step in the reality building process. Once the connections are made, relational concepts (i.e. someone says a noun and you think of the first adjective that comes to mind) are more like an addiction, or the plumbing in your upstairs bathroom than they are a matter of free will and on-the-spot rationalization.

This is precisely what has happened to the extreme right-wing brain ever since Obama was elected President (the first time): they have been hardwired to neurally relate “democrats” and “Obama” with every possible negative adjective or verb that the right wing media has been able to shout at them more than three times.

The word connections pounded into their heads, via their televisions and car radios by their beloved right-wing media have become soldered into their heads (Smile = Happy, Frown = Sad, Democrats = Angry). The result is that they have been removed from the political and cultural reality that exists outside of the republican news bubble." 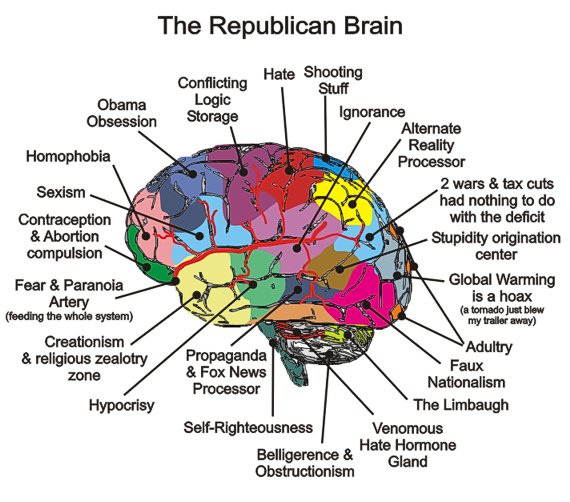 You are so full of it, Achigan!!

Most Americans of a Conservative mindset would agree with the following:

"...When you view the government (and by extension, the taxpayers) as a limitless piggy bank to be exploited for your own personal gain, there is no reason to be a Republican.

Republicans stand for the values that made America great. The person who is unemployed or working for minimum wage and believes that things will never get better is not a real American. They live here and have citizenship, but they are not made of the same stuff as the people who arrived here on sailing ships, tamed the frontier, won WW2, and went to the Moon.

Of course they would be Democrats since that is the party for people who have failed as human beings..."

The real problem with todays conservative party is with people in your age group that have lost touch with the younger people of this nation.

Did you read the College Republican National Committee Report that Has Grim Findings for the GOP.

This statement should (but it won't) make you change your old fashion thoughts about how the GOP is doing:

One of the headlines from the study were the words that up-for-grabs young voters used to describe today’s GOP: “closed-minded, racist, rigid, old-fashioned.” And the party clearly is out of step with millennials on many of the social issues that receive so much media attention. The College Republican survey found that only 30 percent of young voters believe marriage should be legally defined as only between a man and a woman. Even strongly anti-abortion-rights voters said they were disturbed when Republican candidates talked about defunding Planned Parenthood and “redefining rape.” Young people were more likely to value environmental protection than older voters and most frequently listed a path to citizenship as the best way to reform immigration."

I agree with you on the social part of the Republican party. The Dems love to get them talking about social issues which in my mind is none of the gov.'s -business any more than it is the rest of our business. But again, the Repubs. feel strongly I guess about those issues even though it does hurt them. That is why I think I am more Libertarian than anything. I believe that gov is too big, should be made a lot smaller. The States made the federal gov, the federal gov didn't make the states. And what a monster we created. It is hard to stop now.