Carney said that he spoke with Obama about Gates’ book but that the president “didn’t spend a lot of time on it.”

Behind the scenes, however, Obama surrogates were none too pleased with Gates' descriptions of the inner workings of the White House.
Gates suggested that Obama lost faith in his blueprint for Afghanistan, opposed the surge in Iraq purely for political reasons and micromanaged the military more than any president since Richard Nixon.

The Washington veteran had even harsher words for Vice President Joe Biden, saying the former chairman of the Senate Foreign Relations Committee was "wrong on nearly every major foreign policy and national security issue over the past four decades."

Still, Carney said that Obama had “bigger issues” on his plate.

Pretend it isn't there and it will go away.

In an excerpt from Gates book, he writes,

“Most of my conflicts with the Obama administration during the first two years weren’t over policy initiatives from the White House but rather the NSS’s micromanagement and operational meddling which I positively resisted. For an NSS staff member to call a four-star combatant commander or field commander would have been unthinkable when I worked at the White House and probably a cause for dismissal.”

Gates was referring to an incident in which Gen. David Petraeus, commander of U.S. forces in Afghanistan and later director of the Central Intelligence Agency, was angrily dressed down by President Obama in front of a number of administration officials during a National Security Council meeting.

Simply put, a double standard exists whereby Barack Obama demands respect for his presidency, but similar respect is not reciprocated toward others. It represents a frightening and revealing look at how small, petty and insecure the current leader of the free world is despite his power.

Are you very tired tonight? You have been yawning a lot. Time to go beddy bye.

Are you very tired tonight?  You have been yawning a lot.  Time to go beddy bye.

Will you tuck me in?

Simply put, a double standard exists whereby Barack Obama demands respect for his presidency, but similar respect is not reciprocated toward others. It represents a frightening and revealing look at how small, petty and insecure the current leader of the free world is despite his power.
_________________
"If you like your health care plan … you can keep your health care plan! … Period!"

Some people will say and do anything to sell a book because they know people like you will buy it. Gates wants to thank you for promoting his book. Don't hold your breathe for any money rewards from him though.

It's just a case of sour grapes and he knows he can get away with it. A book about how good Obama treated him wouldn't sell too many now would it???

However I do like Gates and have a lot of respect for him.

Let’s not mince words here: Robert Gates has just betrayed the president who appointed him and gave him the Medal of Freedom.
Not because the former Defense secretary has written a book ripping Barack Obama for his handling of the war in Afghanistan: Gates has every right to do that. Not because he described Obama as failing to trust the military: he has every right to do that as well.

No, the betrayal involves the disclosure of private conversations that Obama had every reason to believe would remain confidential. How can a president conduct candid conversations with his inner circle if he fears he’s providing fodder for a future best-seller?

Gates is hardly the first official to engage in such a double-cross. But it’s a surprise because he’s always conducted himself with class. He has a sterling reputation inside the Beltway. He is a public-spirited Republican who agreed to stay on at the Pentagon under a president of the other party after George W. Bush left office.

That reputation makes the Gates critique in “Duty: Memoirs of a Secretary at War” all the more devastating. He accused Obama of ordering a troop buildup in Afghanistan while not really believing in his own policy. And he recounted Hillary Clinton confiding that she had opposed Bush’s 2007 surge in Iraq for political reasons because of the presidential campaign, and Obama “vaguely” agreeing—a damaging anecdote for Hillary.

But the book is riddled with contradictions. Gates winds up saying that Obama got all the decisions right on Afghanistan, praises the courage of his Afghan surge in the face of public opposition, and credits him with approving the mission to take out bin Laden--over Gates’ opposition.

Hillary defenders, meanwhile, can point to his assessment of her as “smart, idealistic but pragmatic, tough-minded, indefatigable, funny, a very valuable colleague, and a superb representative of the United States all over the world.”

Gates is in the midst of a full media rollout: leaks to the Washington Post’s Bob Woodward and the New York Times, an excerpt in the Wall Street Journal, interviews lined up on CBS’s “Sunday Morning,” NBC’s “Today” and Fox’s “Hannity,” among others. The more he rips his former boss, the more books he’ll sell.

Gates is the latest to cash in on his government service. Bush’s former spokesman, Scott McClellan, accused his ex-boss of running a “political propaganda campaign” to sell the Iraq war and “manipulating public opinion.”

Paul O’Neill, fired by Bush as Treasury secretary, skewered him in a book, disclosing that Dick Cheney had said in a private meeting that the White House didn’t care about government overspending because “Reagan proved deficits don’t matter.”

When George Stephanopoulos left the Clinton White House, he charged that the “stupid, selfish and self-destructive” Bill Clinton was unfit to be elected—and his book included scenes in which Hillary cried. Stephanopoulos, now with ABC News, told me Clinton’s impeachment over the Monica Lewinsky mess changed his assessment.

Gates, in his book, seems angry at a White House that insisted on running defense policy and challenging the military. There’s a healthy dose of score-settling here. He even says he detested his job.

But Gates also admits that he often held his tongue rather than voice the criticisms he felt so strongly. Instead, he saved it for the book.
http://www.foxnews.com/politics/2014/01/09/robert-gates-bombshell-book-was-tell-all-betrayal-president/

The Imperial Presidency of Our Banana Republic...

fshnski wrote:"...Simply put, a double standard exists whereby Barack Obama demands respect for his presidency, but similar respect is not reciprocated toward others. It represents a frightening and revealing look at how small, petty and insecure the current leader of the free world is despite his power..."

I doubt this: Look at how often Obama has "reached across the aisle". 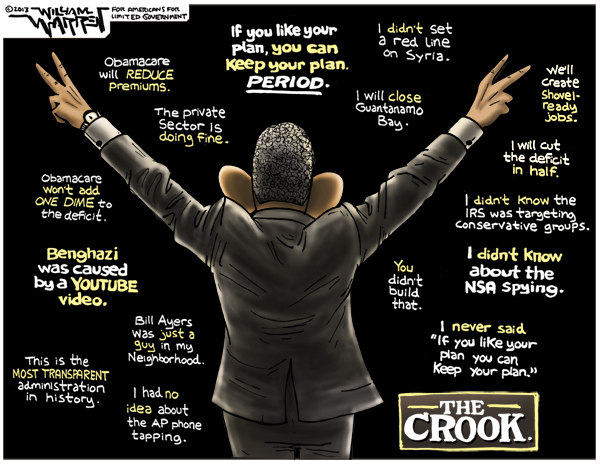