Obama has checked out

Obama has checked out

Delaware. Photo: AFP/Gettty
By Matt K Lewis12:04PM BST 26 Jul 2014
President Obama has emotionally checked out of his job a couple of years early, it seems. How can one tell?
Candidates for president who brazenly assume they are the inevitable victor are sometimes accused of “measuring the drapes” for the White House.
Obama, conversely, seems to be prematurely packing his bags in hopes for an early departure.
Just last week, for example, the Los Angeles Times reported that “The First Family is believed to be in escrow on a contemporary home in a gated community where entertainers Frank Sinatra, Bob Hope and Bing Crosby once maintained estates”.
George Santayana observed that “Americans don’t solve problems, they leave them behind”. Perhaps the president is taking this to heart.

Once again, tough talk followed by soft action against Putin 23 Jul 2014
For rumours to catch fire, an element of truth must typically be involved.
The fact that the press would find relevance in speculating on Obama’s post-White House residence – and identify California as the kind of scene the future ex-president would want to hang out in when he leaves office – is perhaps telling.
And, indeed, this comes on the heels of multiple reports from outlets such as The New York Times and Politico, detailing how Obama has increasingly been spending his time at trendy restaurants and fancy, late-night dinner parties with celebrities and various intellectuals.
Rubbing elbows with the rich and elite is fine enough. Unfortunately, the work suffers. The degree to which he is now phoning it in – sleepwalking perfunctorily through his second term – is astonishing.
And based on his recent handling of situations much more serious than a possible post-presidential move to sunny California, it seems as if “No Drama Obama” is no longer even worried about keeping up appearances; he doesn’t care enough to fake it.
Consider this: In recent days, a) Malaysia Airlines Flight 17 was shot down, apparently by Russian separatists in Ukraine, b) In the Gaza strip, the numbers killed continued to mount as Israelis and Palestinians exchange rocket fire, c) a huge influx of children fleeing Central American poverty and gang warfare swamped America’s southern border, creating a humanitarian crisis. And, oh yeah, d) Christians living in Mosul were given the choice to either convert to Islam or flee the area they have inhabited for nearly two thousand years.
You know what else has happened during this time? a) Obama played many rounds of golf, b) he attended numerous fund-raisers, c) he dined on barbecue in Texas and burgers in Delaware, and d) he almost appeared on the comedian Jimmy Kimmel’s late-night television show in Hollywood.
I say “almost” because the White House finally relented. “We ultimately elected not to have the president do that interview over the course of this trip,” the White House press secretary, Josh Earnest, conceded. “And that is at least in part related to the challenges of doing a comedy show in the midst of some of these other more serious matters that the president’s dealing with in the international scene.”
The irony is that Obama won election in 2008, partly based on his ability to demonstrate leadership (at least, rhetorically).
And, despite a less-than-perfect first term, the public believed enough in his “hope and change” mantra to return him to office - a move reminiscent of Samuel Johnson’s observation about second marriages being “a triumph of hope over experience”.
But today, one wonders if Obama even has the energy left to summon some of the old magic that got him elected. A souffle, as they say, doesn’t rise twice.
While we tend to think of them as polar opposites, Obama’s predecessor had been similarly excoriated for similarly botching a few big moments where he should have been on the job. For President George W Bush, the images of Hurricane Katrina continue to haunt his legacy. He later regretted not going to there immediately after the hurricane hit.
“I should have touched down in Baton Rouge, met with the governor, and walked out and said, 'I hear you. We understand. And we’re going to help the state and help the local governments with as much resources as needed’,” he confessed in 2010.
Woody Allen famously said, 80 per cent of life is just showing up. He wasn’t wrong. But, in lieu of showing up, there is an even easier way to avoid looking quite so out of touch. If Obama were worried about bad optics – about appearing out of touch – he might play a bit less golf (another lesson he could have learned from his predecessor).
During one unfortunate event caught on tape, and featured in the Fahrenheit 9/11 film trailer, the then President Bush was unfortunately filmed saying: “I call upon all nations to do everything they can to stop these terrorist killers. Thank you.” Then, holding up a golf club, he added: “Now, watch this drive.”
This was a brutal blow. Fair or not, playing golf has a way of making one look simultaneously elitist and aloof. Obama tends to dismiss such cautionary tales.
For example, the suggestion that while in Texas he should have gone to the border and addressed the growing humanitarian crisis (instead of attending fund-raisers) was dismissed as the suggestion he do a theatrical “photo-op”.
This is at best unromantic, and, at worst, cynical. Words matter.
Showing up matters. Was it a “photo-op” when Ronald Reagan spoke in front of the Brandenburg Gate and declared: “Tear down this wall!”?
I suppose one could have made that argument.
Obama’s not dumb, and he’s clearly capable of marshalling an effective propaganda campaign when he wants to. So what explains this series of bad optics, which might be described by PR professionals as political malpractice?
The only thing that makes sense is that he is exhausted and, perhaps, has checked out of the job early.
If Nero fiddled while Rome burned, then Obama is dining out, golfing, and raising money while the world collapses.
Matt K Lewis is a senior contributor at The Daily Caller website in Washington, DC 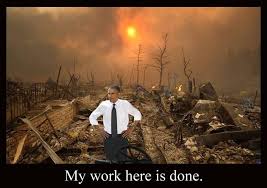 Re: Obama has checked out

Thanks, NH. The perfect Grand Finale to my post!!!!

Re: Obama has checked out