The newspaper was known for ridiculing and baiting Muslims, but the default position is to blame Obama for everything!

At the same time, we have reaffirmed that the United States is not and never will be at war with Islam. Islam teaches peace.

Islam is the religion of peace—we're told...

Maybe it's time we shipped all foreigners out—starting with Muslims.

Wounded and downed police officer shot in the head.

Twelve now reported dead, the names of the suspects are known.

Many photos appear in a British newspaper site.

The timeline of events appears last. 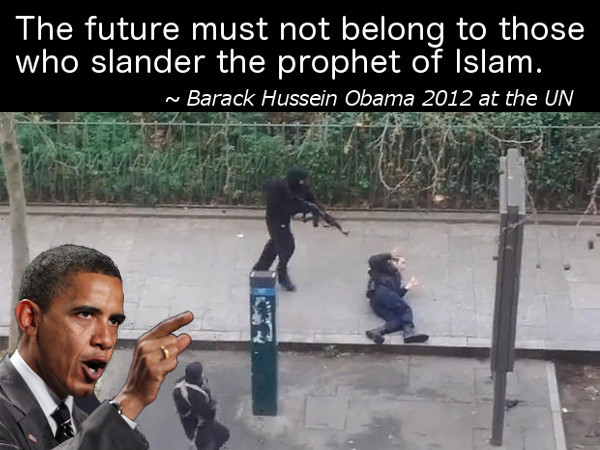 Palestinians cheer at the initial news that 50,000 Americans were killed at the World Trade Center. At the same time, we have reaffirmed that the United States is not and never will be at war with Islam. Islam teaches peace.
—Obama at the UN...

It's been rumored that these killers have just returned from Obama's war in Syria.

Want to know "who's next" in this country?

The jihadists have been successful in imposing self-censorship on the West.

On MSNBC this afternoon, Coleman lamented France has a "historical problem with Islamophobia." —realclearpolitics

Could it be this?

Howard Dean: “These extremists are about as Muslim as I am’’.

Now you know why we are in trouble!

I did not know that even the police are not allowed to have guns in France!! Are you kidding me????

Two in Custody, One Dead...

Barack Obama has once again astonished the world with the swiftness of his response to today's Charlie Hebdo shootings.

The White House statement was swift, incisive, and to the point:


"I strongly condemn the horrific shooting at the offices of Charlie Hebdo magazine in Paris that has reportedly killed 12 people. Our thoughts and prayers are with the victims of this terrorist attack and the people of France at this difficult time. France is America’s oldest ally, and has stood shoulder to shoulder with the United States in the fight against terrorists who threaten our shared security and the world. Time and again, the French people have stood up for the universal values that generations of our people have defended. France, and the great city of Paris where this outrageous attack took place, offer the world a timeless example that will endure well beyond the hateful vision of these killers. We are in touch with French officials and I have directed my Administration to provide any assistance needed to help bring these terrorists to justice."

I'd say that about covers it. Attack was "horrific" and "outrageous" -- check. "Thoughts and prayers" -- check. France an old friend -- check. The "great city of Paris" -- check. "Universal values" -- check. "Shoulder to shoulder" -- check. Even a nice subtle use of "reportedly" to cover any errors or omissions.

I can't see that he's left anything out.

Well, I noticed no mention of Islam...

The newspaper is bravely putting out another issue this week.

Whose side are you on?

News Hawk wrote:Whose side are you on?

I have always believed in common sense! Macho satire may have gotten a dozen people killed!!

News Hawk wrote:Whose side are you on?

I have always believed in common sense! Macho satire may have gotten a dozen people killed!!

"Common sense" would already have Muslims restricted to the Middle East.

All satire comes with a guarantee of free speech. (Except in Washington)

French President Francois Hollande swiftly called the deadly Wednesday shooting at Paris' Charlie Hebdo magazine "an act of exceptional barbarity," without doubt a terrorist attack. There was no hedging.

The Socialist leader didn't engage in the sort of blather White House spokesman Josh Earnest offered on MSNBC shortly after the shootings. Earnest called the attack a "terrible act of violence," but not necessarily terrorism. He repeated the mantra that Islam is a "religion of peace".

Aren't we tired of this endless dalliance with PC yet?

News Hawk wrote:"Common sense" would already have Muslims restricted to the Middle East.

That is ethnic bigotry at it's best!!

News Hawk wrote:All satire comes with a guarantee of free speech.  (Except in Washington)

The world doesn't share the guarantee of free speech we enjoy. That's why common sense should be deployed!

News Hawk wrote:"Common sense" would already have Muslims restricted to the Middle East.

That is ethnic bigotry at it's best!!

News Hawk wrote:All satire comes with a guarantee of free speech.  (Except in Washington)

News Buzzard wrote:The world doesn't share the guarantee of free speech we enjoy. That's why common sense should be deployed!

The Western world has it. Those who quote the Koran don't.

What ethnicity is Muslim?

Obama went to a Catholic school in Indonesia, where his Muslim stepfather (Lolo Soetero) listed Barry's (Barack's) religion as Muslim.

What ethnicity is Barack Obama?

"Earlier in the day, the Financial Times attracted a raft of criticism for publishing a column that insinuated that Charlie Hebdo's staff brought on their massacre themselves, but Imam Choudary doesn't even bother with a sop to free speech, which he dismisses as a non-Islamic concept."
—hotair

It appears you agree with the Muslims, where Hillary's strength is unquestioned.

The NYTs translated from French, and changed the meaning of French reports:
http://beforeitsnews.com/tea-party/2015/01/the-new-york-times-stealth-edits-charlie-hebdo-piece-deleting-muslim-proselytizing-2544812.html

The Danes Either Have No "Common Sense" or They Support Free Speexh...

The Danish newspaper Berlingske has republished cartoons on Islamic themes from the French satirical magazine Charlie Hebdo, as part of its coverage of the attack which killed 12 people in Paris on Wednesday, reports Reuters.

The Thursday print edition of Berlingske, available online on Wednesday night, showed several past front pages from the French magazine. Among them was one depicting the Prophet Mohammad and another about Sharia law.

Such images provoked angry reactions from some Muslims when originally published by Charlie Hebdo, and footage of the Wednesday killings at the magazine's offices showed gunmen shouting "we have avenged the Prophet Mohammed".

Berlingske's Editor in Chief Lisbeth Knudsen said her newspaper's action in republishing the cartoons was not a protest.

"We will print them as documentation of what kind of a magazine it was that has been hit by this terrible event," Knudsen was quoted as having said.

How Could "Common Sense" Fail to Happen?

More than 2,000 people are feared dead after Boko Haram destroyed “10 to 20” communities in Nigeria’s rural northeast, according to a senator from the region. “These towns are just gone, burned down,” said Ahmed Zanna. “The whole area is covered in bodies.”

The radical Islamic group razed the town of Baga along with several others over the past five days. The 2,000 are unofficially unaccounted for.
The Daily Beast

The time for "Common Sense" is over for these villagers...!

So, Government censorship is "on the table"?

I don't believe in censorship or the ethnic cleansing you advocate!

This is a British Muslim:

This is a Somali Muslim: 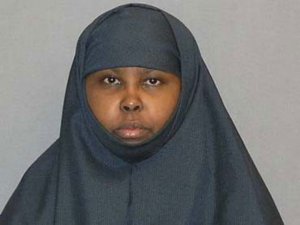 From which ethnicity are you taking my viewpoint?

Now you've taken a page from Oo's handbook: I advocate the cleansing of a cult, not a race. Send them all back before it's too late.

A recent French survey found 69% approval of ISIS! It may be time for France to give up their nuclear missiles!

Liberal US papers have self-censored themselves by pixilating photographs that could be offensive to the cult.

Many European papers have those photographs prominently displayed on their front pages!

Former Muslim Ayaan Hirsi Ali has some words for you:

France is waking up while Americans are complaining about waterboarding.

A German newspaper in solidarity with the murdered newspaper employees was struck by arsonists last night.

BERLIN (Reuters) - A Hamburg daily that reprinted satirical cartoons from French newspaper Charlie Hebdo was hit by arsonists at the weekend, raising security concerns in Germany on the eve of a planned mass rally against Islam in the city of Dresden.

Islamist militant attacks on Charlie Hebdo and a kosher deli in Paris this week that killed 17 people have fuelled fears of similar assaults in other European countries and prompted a warning from German Interior Minister Thomas de Maiziere.

"I am very concerned about well-prepared perpetrators like those in Paris, Brussels, Australia or Canada," he told the newspaper Bild am Sonntag. There were about 260 people in Germany regarded as dangerous Islamists, he said.

Bild am Sonntag said U.S. intelligence agencies had tapped conversations of senior ISIS members in which they said the Paris attacks were the start of a series in Europe.

In Hamburg, two people were arrested after an incendiary device was thrown into a building of the Morgenpost daily, setting some documents on fire, police said.

The Morgenpost had reprinted cartoons from Charlie Hebdo in a show of solidarity with the French weekly known for its mocking broadsides against Islam and other religions, and with the principle of freedom of expression overall.

While Chancellor Angela Merkel took part in the silent march in Paris, around 18,000 people attended a rally in front of the French embassy in Berlin, police said, with people holding up slogans like 'JE SUIS CHARLIE'..."
https://ca.news.yahoo.com/arson-attack-hamburg-newspaper-printed-charlie-hebdo-cartoons-072635062.html

European leaders (and Israel's PM) march for the "Freedom of Expression", so where IS Obama?

Why weren't ANY Americans sent? 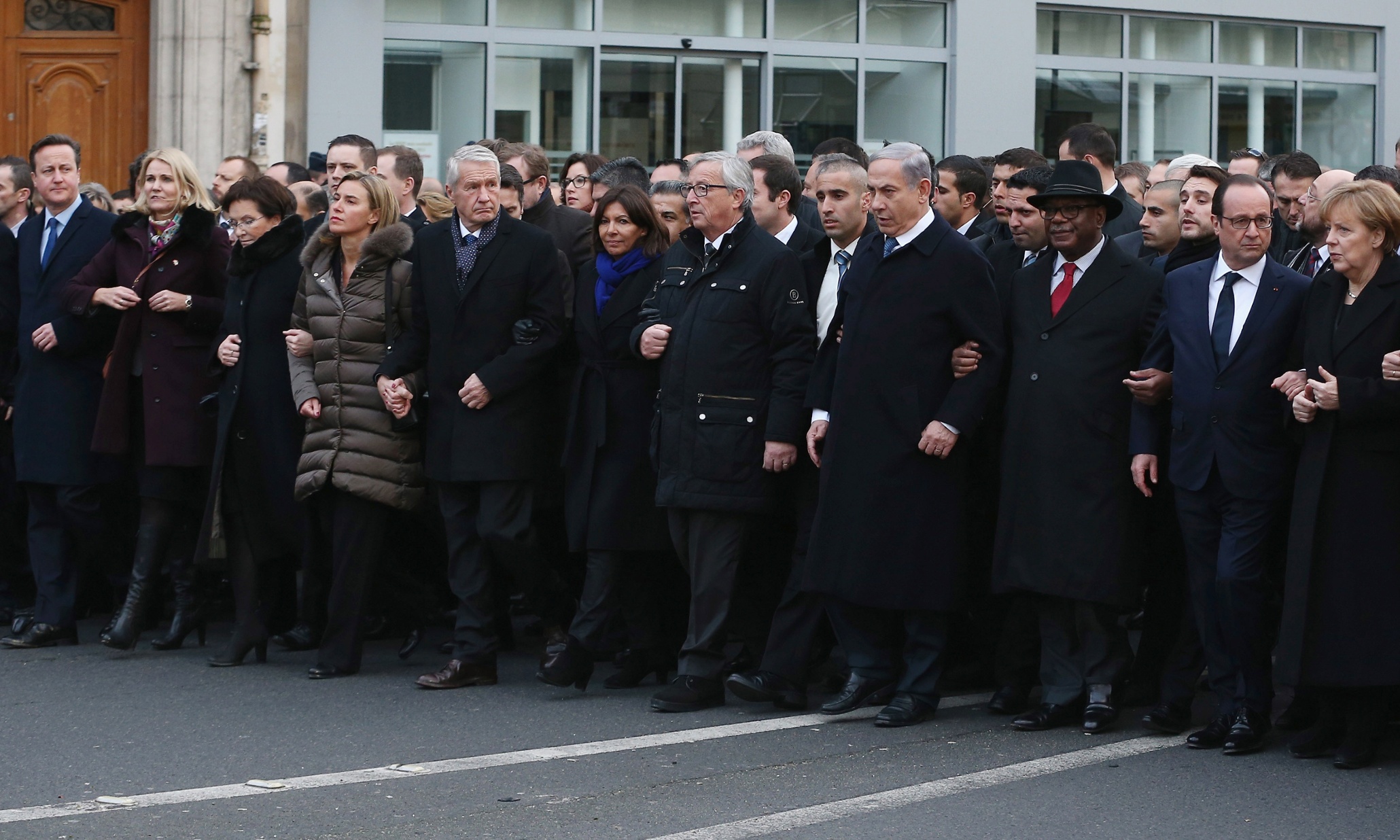 That Obama is on the wrong side?

'Wonder what the Grubers on this forum think of Obama after listening to Arabic being spoken, and watching Obama's EXPRESSION in this brief video?

Don't Wear a "Jesus Loves You" T-Shirt in Dearborn, Michigan...!

You'll get stones thrown at you...

I even heard some DEMS criticizing Obama for being a no show! He is such an immature man, like a little boy. He probably wanted to watch the football games so didn't want to be stuck in Paris.

The right wing assault on Obama never stops! What a joke!! Obama has offered all kinds of assistance to France in this case and his appearance would have been a logistical nightmare for security. Get a life!!