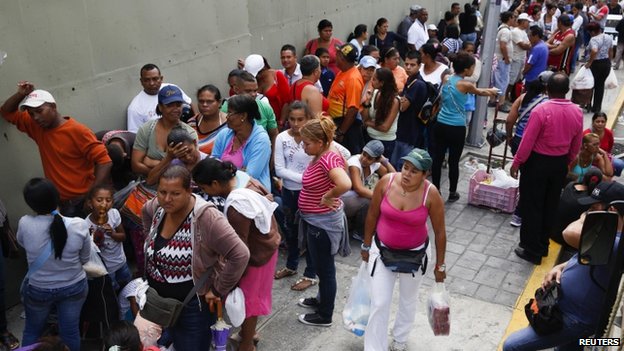 Venezuelan President Nicolas Maduro says the owners of an unnamed chain of shops have been arrested for artificially creating long queues. (Venezuela's equivalent of CVS Pharmacies)

Mr Maduro said the owners had reduced the number of employees working on cash tills in order to create queues and "annoy the Venezuelan people".

He has accused Venezuela's business elite of boycotting his government.

The opposition blames the socialist policies of the past 16 years for the worsening economic crisis.

"Yesterday we detected that a famous chain of stores was conspiring, irritating the people," said Mr Maduro.

"We came, we normalized sales, we summoned the owners, we arrested them and they're prisoners for having provoked the people," he said.
http://www.bbc.com/news/world-latin-america-31086391

Soviet-style "Central Planning"—brought to Venezuela (and eventually to us) via Socialism. (Where the force is at first fines—and later, Commie assault rifles).

Colorado is giving foreigners licenses in the Soviet style: Between Aug. 1 and Oct. 10, about 8,000 appointments were successfully made. So far, 6,701 people have been issued 4,131 licenses, learner's permits and ID cards, says Daria Serna, communications director for the Colorado Department of Revenue. Of those appointments, there were more than 1,200 no-shows. Others failed the tests or did not have the required documentation, such as a utility bill proving they lived in Colorado the previous two years and a passport from their home country.
http://www.latimes.com/nation/la-na-colorado-drivers-licenses-20141018-story.html