None Dare Call It TREASON...!

None Dare Call It TREASON...!

Retired 4-Star U.S. Navy Admiral James Lyons, speaking at the National Press Club in January, says that under Obama’s guidance, the Obama Regime has been infiltrated by the Muslim Brotherhood terrorism front group, saying that the radical anti-freedom organization has penetrated every U.S. security agency.

Admiral Lyons said that “the transformation of America has been in full swing ever since 2008,” the year Obama was elected based upon his campaign promise to “fundamentally transform America.”

Speaking about Obama’s refusal to attend the recent march in France, reportedly attended by more than 50 world leaders to condemn Islamic terrorism following the gruesome murders of cartoonists who had the audacity to lampoon Islam, Admiral Lyons said that act was a “signal to Islamic Jihadis,” and is “one of many signals he sent over the years while in office.”

“There’s no question we got a hell of a job ahead of us,” Admiral Lyons said. “With the Muslim Brotherhood penetration in every one of our national security agencies, including all our intelligence agencies,” he proclaimed.
http://joemiller.us/2015/02/four-star-admiral-james-lyons-makes-astounding-allegation-muslim-brotherhood-terrorists-obama-video/

I'm sure this will be broadcast to every American's TV set...

Why isn't this a surprise to me?

I've been preaching about "The Manchurian Candidate" for six years—going on seven...

"Of course, he hates America, he's not even American. His formative years were in Indonesia and he was a Muslim. It says it on his school records," Jackson said Friday on the Newsmax TV program.
Newsmax.com

Yes, it does, and he very likely is—having said that to George Stephanopoulos.

Much to the surprise of many Americans, the Obama administration is revealing its plan to retake Mosul, Iraq’s second largest city, months before the anticipated battle happens.

“If a private in Iraq had revealed this kind of planning inadvertently by leaving a plan in the chow hall or the gym, he might have faced a court-martial, but it’s now become a matter of policy this administration is going to announce war plans in advance.”

Do Congressional Republicans really have to do or say anything?

Ret. General Drops Bombshell: Obama Should Be Arrested For This ‘Treasonous Activity’

Vallely, while a guest on the Real Side radio program earlier this month, stated above anything else that Obama should be held accountable for his sympathies for the Muslim Brotherhood in particular and his actions regarding the Benghazi tragedy. The retired general said one group that should hold the president’s feet to the fire are high-ranking members of the military.

The program’s host, Joe Messina, asked whether Obama would just replace those military leaders with others who agree with him, as he has done several times in the past.

Vallely responded: “Well then we arrest him for treasonous activities.” He noted that the group he helps lead, the Citizens Commission on Benghazi, counts at least fourteen different actions the president has taken that could be considered treasonous.

Vallely believes Obama has taken these actions because he has an agenda. “We know he’s a radical Islamic sympathizer. He sympathizes with the Muslim Brotherhood,” he said.

He noted the Middle East is in disarray because of the policies of the administration. “Baghdad is under complete threat.” Further, Vallely pointed out that Major General Qasem Soleimani, from the Iranian Revolutionary Guard, is “going to fly in, from what we hear, 8-15 thousand Iranian troops in to bolster Assad in Damascus and save that regime.” Newsweek reported on this move by Iran earlier this month.

Vallely also took Obama to task for stating a few weeks ago that he is waiting on the Pentagon to give him strategic plans to defeat ISIS. Obama’s remarks also prompted a military official to respond: “What the f— was that? We have given him lots of options, he just hasn’t acted on them,” as reported by Fox News.

Vallely was not surprised at this response. The DOD is always working on multiple operational plans to address threats to the United States, he said. The problem is Obama “has no heart. He is a loser. I think he’s a coward, and he does not want to engage.”

Vallely believes it is up to Congress to “shut down” the president on multiple fronts using the power of the purse, among other tools.

“I’m tired of the deceit, the lies, the deception of this administration,” Vallely told Real Side.

Sen. Ted Cruz (R-Texas) released a report last year listing the Benghazi cover-up and continued aid to Egypt following a military coup among the 76 “lawless acts” for which the Obama administration needed to be held accountable. (The coup took out Muslim Brotherhood-backed Mohammed Morsi, but Cruz highlighted that the aid continued without congressional authorization and contrary to federal law.)
http://www.westernjournalism.com/listen-ret-army-general-just-said-obama-should-be-arrested-for-this-treasonous-activity/

The Muslim Brotherhood is in the White House! 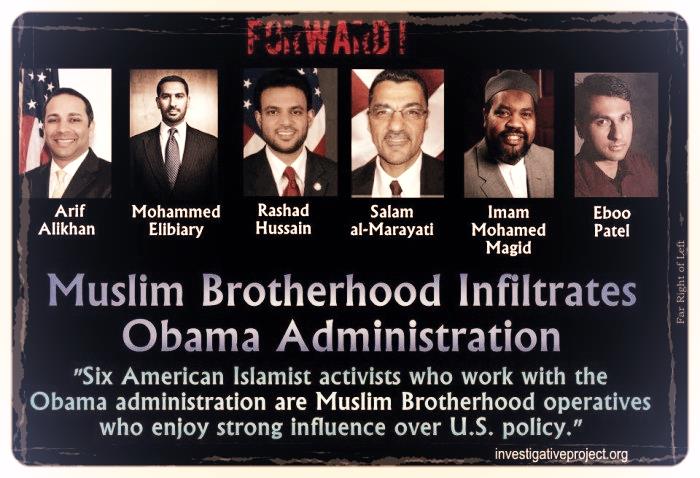 I can hardly stand to listen to anything about that man, the President.