President Obama’s amnesty by edict has always been about adding new Democrats to the voter rolls, and recent action by the Department of Homeland Security provides further proof. Sources at the Department of Homeland Security report to PJ Media that the United States Citizenship and Immigration Services is reallocating significant resources away from a computer system — the “Electronic Immigration System” — to sending letters to all 9,000,000 green card holders urging them to naturalize prior to the 2016 election.

This report outlines an immigrant integration plan that will advance our nation’s global competitiveness and ensure that the people who live in this country can fully participate in their communities.

“Full participation” is a term commonly used to include voting rights.  To that end, resources within DHS have been redirected toward pushing as many as aliens and non-citizens as possible to full citizenship status so they may “fully participate” in the 2016 presidential election.  For example, the internal DHS letter states one aim is to “strengthen existing pathways to naturalization and promote civic engagement.”

Naturalization plus mobilization is the explicit aim of the DHS “Task Force on New Americans.” Multiple sources at DHS confirm that political appointees are prioritizing naturalization ahead of the 2016 presidential election.

Empirical voting patterns among immigrants from minority communities demonstrate that these new voters will overwhelmingly vote for Democrat candidates.  If the empirical rates of support for Democrats continued among these newly naturalized minority voters, Democrats could enjoy an electoral net benefit of millions of new voters in the 2016 presidential election.

Other DHS sources report that racial interest groups such as La Raza (translated to “The Race”) and the American Immigration Lawyers Association have been playing a central and influential role in rewriting the administration’s immigration policies — both the public policies as well as internal and largely unseen guidelines.

DHS “intends to ‘recapture’ ‘unused’ visas from years past to grant more visas and LPR [green card] status. In addition to this ‘visa blizzard,’ the agency will allow folks to jam in applications during the blizzard, knowing that the visa applicant/beneficiary is not eligible for the visa.”

This means that DHS is not only rushing green card holders toward citizenship before the next election, but also jamming previous visa holders toward green card status.  These policies and priorities add to the brazen public positions of the president toward enforcing immigration laws.
Read more: http://pjmedia.com/jchristianadams/2015/04/23/homeland-security-working-overtime-to-add-new-americans-by-2016-election/#ixzz3YMJ1AJcc 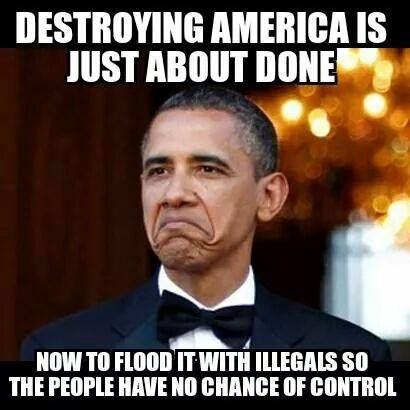 What Are We Becoming?

This was in the news again, today.

DHS is altering their computer list to send letters by snail-mail to 9,000,000 "undocumented workers", and even to extend the same "privileges of citizenship" to those holding green cards.

(So foreigners can elect the next President).

That line is getting awfully steep! Where is all that money going to?