The Collapse of Obamacare...

The Collapse of Obamacare...

Video at the link:


The New York Times reports that between January and March of this year, the Obama Administration is and will spend $17 million a month advertising for ObamaCare.

It looks like the enrollments may come in at 6.2 million by the end of the month. I hardly call that a collapse!

Where is Obama’s fix for Obamacare?

Where is the Democrat fix for Obamacare?

7 million people have lost coverage because of Obamacare and they were actually paying for it..

According to Obama, 5.2 “signed up” for Obamacare.

That would be a net loss.

The Obama Administration cannot say how many have really signed up (paid) and they are counting Medicaid as sign ups (they pay nothing).

Medicaid sign up would be a detriment not an asset. but hey..its a number right?

The latest news reports are the premiums will double and in some states triple next year.

That net loss nonsense is nothing but jive talk from the Right Wing Book Of Mythology. The overwhelming majority of folks who got cancellation notices got their health insurance back. If you think the 14 million number is bogus, then lobby your representatives to repeal Obamacare another 50 times. Good luck with that!!!

[/quote]"The president claimed that the number of enrollees has already reached the point where the law will work rather than collapse from lack of participation. But even if we accept his premise that falling millions of customers short of the announced goal of seven million is no big deal, the fact that hundreds of thousands of those being counted in the pool of those he’s counting are not covered because of non-payment of premiums makes his assertion a colossal fraud."[/quote]
—Commentary Magazine

6.2 million and counting is pretty close to the target, and I dare you to find anyone in congress with the stones to take healthcare away from 14 million people. The reality is you're on another planet!

The Math Behind Obamacare... 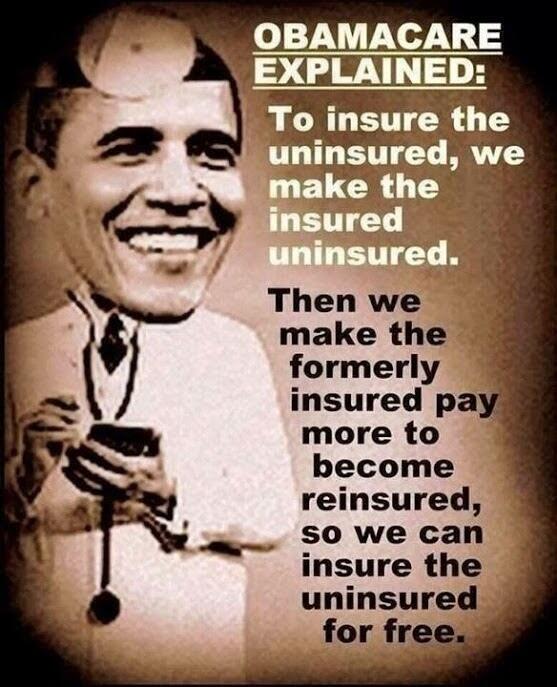 ...We are about to see this deviousness on full display as the ongoing disaster that is ObamaCare continues to unravel. As premiums spike, access is reduced, quality of healthcare plummets, and more and more doctors and hospitals are discovered to be "out of network," all consequences of his misguided and misbegotten health policies, Obama can simply shrug his shoulders and say, "Not my problem. Your problem is with your private insurance carrier. Take it up with them. We told you they were greedy and uncaring. See?"

So no matter what happens, he wins. And America loses. That's what happens when America elects a fascist to the highest office in the land.
http://www.gopusa.com/freshink/2014/06/05/why-president-obama-is-a-fascist/?subscriber=1

You were told of this!

Another Conservative caves on the Medicaid expansion:

After November we may see about 4 more Democratic Governors as several of the blockhead Republicans are behind in their polls. I think at least Maine and Pennsylvania will go into the Democrat's column, and who knows, maybe Florida and Wisconsin as well. That would be a good thing for Obamacare!

Did you see that about 2 million that signed up for O Care either made a mistake or are lying about income, legal status or something else. Most of them were about income.

I'm actually glad there is a way to verify the information and most of it sounds like the outdated stuff:

News Buzzard wrote:"... I think at least Maine and Pennsylvania will go into the Democrat's column..."

Will there be precincts in Pennsylvania that again vote Dim 100%?

Then, you may be right.

News Hawk wrote:So no matter what happens, he wins. And America loses. That's what happens when America elects a fascist to the highest office in the land.

You were told of this!

Worthy of a re-post, as I have been saying this for years now.


Obama is Not a Socialist

It bothers me a little when conservatives call Barack Obama a “socialist.” He certainly is an enemy of the free market, and wants politicians and bureaucrats to make the fundamental decisions about the economy. But that does not mean that he wants government ownership of the means of production, which has long been a standard definition of socialism.

What President Obama has been pushing for, and moving toward, is more insidious: government control of the economy, while leaving ownership in private hands. That way, politicians get to call the shots but, when their bright ideas lead to disaster, they can always blame those who own businesses in the private sector.

Politically, it is heads-I-win when things go right, and tails-you-lose when things go wrong. This is far preferable, from Obama’s point of view, since it gives him a variety of scapegoats for all his failed policies, without having to use President Bush as a scapegoat all the time.

Government ownership of the means of production means that politicians also own the consequences of their policies, and have to face responsibility when those consequences are disastrous — something that Barack Obama avoids like the plague.

The same principle, or lack of principle, applies to many other privately owned businesses. It is a very successful political ploy that can be adapted to all sorts of situations.

Back in the 1920s, however, when fascism was a new political development, it was widely — and correctly — regarded as being on the political left. Jonah Goldberg’s great book “Liberal Fascism” cites overwhelming evidence of the fascists’ consistent pursuit of the goals of the left, and of the left’s embrace of the fascists as one of their own during the 1920s.

Mussolini, the originator of fascism, was lionized by the left, both in Europe and in America, during the 1920s. Even Hitler, who adopted fascist ideas in the 1920s, was seen by some, including W.E.B. Du Bois, as a man of the left.

It was in the 1930s, when ugly internal and international actions by Hitler and Mussolini repelled the world, that the left distanced themselves from fascism and its Nazi offshoot — and verbally transferred these totalitarian dictatorships to the right, saddling their opponents with these pariahs.

What socialism, fascism and other ideologies of the left have in common is an assumption that some very wise people — like themselves — need to take decisions out of the hands of lesser people, like the rest of us, and impose those decisions by government fiat.

The left’s vision is not only a vision of the world, but also a vision of themselves, as superior beings pursuing superior ends. In the United States, however, this vision conflicts with a Constitution that begins, “We the People…”

That is why the left has for more than a century been trying to get the Constitution’s limitations on government loosened or evaded by judges’ new interpretations, based on notions of “a living Constitution” that will take decisions out of the hands of “We the People,” and transfer those decisions to our betters.

Only our own awareness of the huge stakes involved can save us from the rampaging presumptions of our betters, whether they are called socialists or fascists. So long as we buy their heady rhetoric, we are selling our birthright of freedom.

More whining from the anti-Obama crowd !

Similar topics
» USA in Collapse?
» July 1—The Collapse of the Dollar?
» Scary thought of collapse
» Obamacare Is Not So Bad After All
» US Stock Market Collapse Imminent?