President Obama's unilateral executive action on immigration will make hundreds of thousands, perhaps more than a million, illegal immigrants eligible for federal transfer payments. That will be done primarily through two widely used programs — the Earned Income Tax Credit, or EITC, and the Additional Child Tax Credit, or ACTC.

As it turns out, those two programs are already among the most corrupt and fraud-ridden in the entire federal government. A newly-released report from the inspector general of the Internal Revenue Service confirms that the EITC is plagued by fraud (which was already well known) and also reveals for the first time that the ACTC is even worse.

According to the inspector general, the IRS paid out $63 billion in EITC benefits in 2013. Of that, 24 percent, or about $15 billion, was given improperly to people not qualified to receive it.

The IRS paid out $26.6 billion in ACTC credits in 2013. The inspector general reports the child credit improper payment rate for that year was somewhere between 25.2 percent and 30.5 percent — worse than the EITC.

Considering that federal law defines a program as having "significant improper payments" when such payments exceed 2.5 percent of all the money the program sends out, those are pretty terrible numbers.

And now the programs — and the fraud — are likely to grow with the president's immigration order. It's something Obama did not take time to explain when he made the announcement.

Can Government fraud be made any worse?

Think Obama Knows Where "They" Are?

Big Money from China gets Chinese Citizens into the US by "Pay As You Go" Visas.

No wonder the government fought hard to keep the information from going public.

Obama's "Deportations" are a myth!

Since Obama took office the number of immigrants who have entered the U.S. legally has risen an astounding 700%, according to government figures cited in the article. Word has spread among rich foreign nationals because “the number of foreign citizens applying for the visas has grown even faster, from 853 in 2008 to 12,453 in 2014,” the story says. A former federal immigration official quoted in the article confirms that Obama has been pushing the visa program via a “major promotion.” An overwhelming majority of the “investors” are from communist China.

As if this weren’t bad enough, a Houston news station investigating the recent influx of Central American illegal immigrants obtained downright scary information after duking out with the government for six months. Thousands of Central American families caught crossing the border between July 18 and October 28 had to be released on their own recognizance because there wasn’t enough detention space, according to the documents obtained by the Texas news station from the Executive Office of Immigration Review (EOIR). All were ordered to appear before an immigration judge at a later date.

Here is where it gets really crazy; 96% of the removal orders occurred “in absentia,” which means the illegal immigrant, not surprisingly, didn’t show up for the hearing. So, essentially, the U.S. government deported a ghost in nearly all of these cases. That means the violators are still somewhere in the country and nobody really knows where. Here is one figure reluctantly provided by the EOIR; of the 15,614 families caught crossing the border, but not detained, 4,197 were ordered removed from the country in absentia.

Our government trusts foreign nationals who have violated our laws by entering the country illegally, then releases them into our communities and trusts them to show up in court at a later day! This happens all the time, the EOIR admits in the news segment, but not in such large numbers. Typically the agency reports an annual 11 to 15% “in absentia” rate. Many Americans might agree that, after the worst terrorist attack in U.S. history, no foreign national in the country illegally should be released into the community and trusted to show up in court for a court hearing.
http://www.judicialwatch.org/blog/2014/12/fraud-infested-visa-program-grows-700-illegal-aliens-deported-absentia/

One thousand of the 36,000 illegal immigrant criminals the government released in 2013 have gone on to commit other crimes, including child sex abuse, hit-and-run and child cruelty..."
http://www.washingtontimes.com/news/2015/jan/30/illegal-immigrants-released-custody-committed-1000/#ixzz3QM7qHE00

We need an adult in the White House.

AGAIN I agree, it would be nice if we had a grown up in the White House, wouldn't it!!!

COWS
Is it just me, or does anyone else find it amazing that during the mad cow epidemic our government could track a single cow, born in Canada almost three years ago, right to the stall where she slept in the state of Washington?

And, they tracked her calves to their stalls. But they are unable to locate 11 million illegal aliens wandering around our country.

Maybe we should give each of them a cow.

Arizona Sheriff: Up To 30% of Illegal Aliens Caught at Border Have Criminal History in U.S.

Speaking before the House Judiciary Committee on the issue of illegal immigration, Sheriff Paul Babeu, from Pinal County, Ariz., said up to 30 percent of the roughly 120,000 illegal aliens apprehended every year at the southwest U.S. border around his county have some kind of criminal record in the United States, adding that “the border is not more secure than ever” as President Barack Obama has stated.

He also said the situation is so lawless in some areas it is like a war-zone on American soil, where “local law enforcement is leading the effort to fight criminal syndicates from a foreign nation.”

According to Babeu, between 88,000 and 123,000 illegal aliens are apprehended each year at the Tuscon Sector, one of nine border patrol zones along the U.S.-Mexico border. Among those illegal aliens, between 17 and 30 percent have a criminal record in the country, Babeu testified.

“This clearly shows that the border is not more secure than ever,” he said.

Babeu also detailed the drug-running and smuggling operations that have become more and more prevalent in his county. In one day alone, law enforcement officials arrested 78 members of a notorious cartel and seized 108 illegal weapons, all during a single drug bust.

“[These are] not just handguns,” Babeu explained. “These are scoped rifles and AK-47s, two of which were traced back to the Fast and Furious operation. This is in my county.”

Illegal aliens who assist in drug-running efforts are also situated on mountaintops as “scouts,” equipped with binoculars and encrypted radios to avoid law enforcement, he said.

“When I tell a story like that, having served a tour in Iraq and commanded soldiers in the army, it almost appears I’m telling a story of some war-torn area,” Babeu said.

“This is on American soil. That’s what’s so disruptive, is the fact that here, as the sheriff, where our primary job is to answer 9-1-1 calls, how on Earth did we get here to this place that local law enforcement is leading the effort to fight criminal syndicates from a foreign nation on American soil?”

Babeu also described what he referred to as a “mass prison break,” in which hundreds of illegal alien criminals have been released from custody by Immigrations and Customs Enforcement and sent back into the local community.

“These are the people that everybody, including the president, said are the bad actors,” he said, adding that those released people have criminal records that include rape, manslaughter, child molestation, financial crimes, armed robbery and assault against law enforcement.

When he asked for more information regarding these individuals and their criminal history, the federal government refused –and continues to refuse -- to give it to him, Babeu said.

“I, as the sheriff, who swore an oath to protect the people of my county, should have a right to that information,” Babeu said.

“I would urge this Congress to stand up as a lawmaking body, to enforce the laws, just as you expect me and every other law enforcement officer locally to do, and secure the border,” he added."
CNSNews

There are no words!

“In his executive decree, the President has opened up the possibility that hundreds of thousands of individuals illegally in the United States will be ‘paroled’ and given U.S. citizenship. Such a policy extends birthright citizenship to the foreign-born who unlawfully set their feet upon American soil,” Sessions said.

“It is an offense to the very idea of citizenship as something sacred, precious, and treasured,” he added. 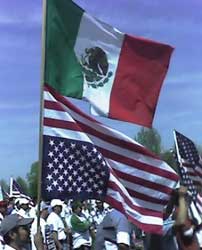 Number of Undocumented Immigrants Failing To Appear At Hearings Increasing

Washington DC - The federal government said the number of undocumented immigrants failing to appear at deportation hearings is on the rise. According to the Executive Office of Immigration Review, the number of people who did not show after being released on bond or on their own recognizance grew by 153 percent in the last four years. Immigration judges ordered deportations for those no-shows. About 30 to 40 percent of undocumented immigrants failed to appear at their hearings last year. The statistics also show that judges grant asylum less than 50-percent of the time while immigrants from Central American countries...
—KRGV

California estimates that between 2.2 and 3.2 Illegals are eligible.

(An estimate with a million-count error?)

Add non-Obamacare government health insurance to the benefits that foreign nationals currently illegally present in the United States could receive should President Obama’s November 2014 executive action be determined constitutional in the courts.

Send VP Biden to Latin America to invite foreigners in—illegally—and they get free healthcare. Most are of voting age! This is NOT available to Legal Immigrants—they have to pay like the rest of us...

Congressman Luis Gutierrez (D – Illinois) clearly warned us a while ago that illegal immigrants would turn to unprecedented militancy if Barack Obama’s executive amnesty plans were foiled.
Hot Air

Sure, why not? Kill the goose that laid the golden egg. Is that the saying?

A mainstream Arizona newspaper is decrying the small section of the Arizona-Mexico border that has a 14-foot-high primary fence because it is too high for illegal immigrants to safely cross. The article, “Border Fence Jumpers Breaking Bones,” includes the claim that sections of the border with a 14-foot-high fence are “as tall as a two or three-story house” and tells the stories of several women who broke bones and were treated extensively to healthcare and surgeries at the expense of U.S. taxpayers.

The writer never mentions any lives directly lost as a result of there not being a border fence in most sections, such as when Mexican nationals crossed into the U.S. and murdered father and husband Robert Rosas, a U.S. Border Patrol agent.
Breitbart

Well, that is a different look at "Boarder Security"...

Similar topics
» NY Times Backpedals
» Obamacare Is Not So Bad After All
» "Ebola Czar" Has No Health Credentials...
» Be careful what you wish for GOP
» Why Teachers Are More Grubered Than We Thought...