A technology company that provided the program Hillary Clinton's team used to scrub her private server of emails bragged on its website Thursday that it had prevented the FBI from accessing deleted records.

BleachBit, the publicly-available application that was used to deleted some of Clinton's emails ahead of an FBI investigation, said it had not yet been served a subpoena over its involvement in the destruction of potentially classified records.

A headline on the company's website read: "BleachBit stifles investigation of Hillary Clinton."

Rep. Trey Gowdy brought the involvement of the program to light Thursday when he told Fox News that Clinton's emails were so fully deleted that "even God can't read them."
http://www.washingtonexaminer.com/tech-firm-brags-about-blocking-fbi-from-recovering-clinton-emails/article/2600283

I saw that article.

FBI director Comey tells us Hillary violated security, broke the law, mishandled top-secret information, and flat-out lied about damn near everything.  He stood before the nation and ticked off guilty verdicts one after another.

Then, poof!  It all just went away.  No indictment, no headlines, no outrage, nothing.  The media's message – what email?  What scandal?  The whole private server flap was effectively erased from history, and we're left asking what just happened. 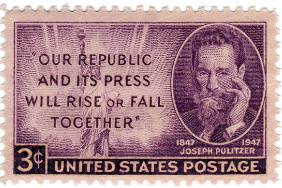 Did you hear she passed out today while at the 911 ceremonies? No? It's been keep pretty quiet, hasn't it? She lost her shoe, the secret service agents caught her and took her to her car.

WHL wrote:Did you hear she passed out today while at the 911 ceremonies?  No?  It's been keep pretty quiet, hasn't it?   She lost her shoe,  the secret service agents caught her and took her to her car.

Like the above, it'll go "poof"—like it never happened.

The Dims can legally replace Hillary with Biden, Liawatha, Kaine, or anyone else!

(Not Bernie, as he quit the Dim Party).

Hillary looks OK to me...

(Except for the unconscious and shaky part, losing her shoe, having something long and silver-colored fall out on the sidewalk, and falling on her face inside the van). 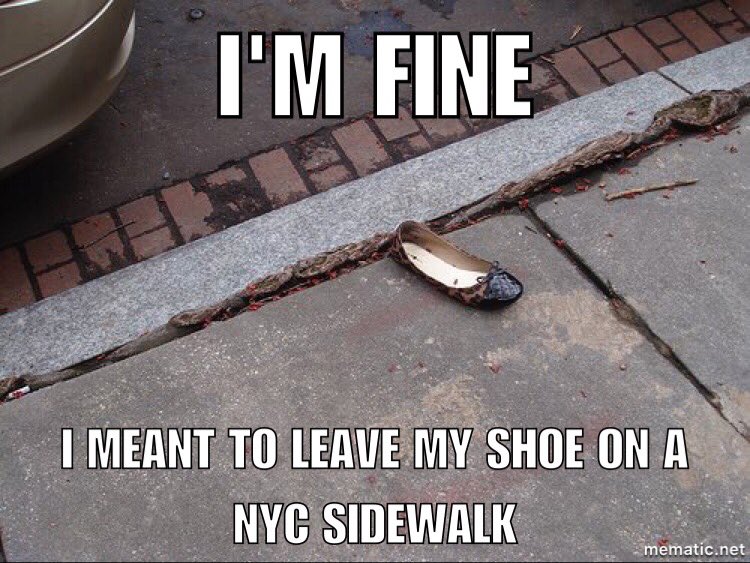 I’d be in favor of Castro myself. Not Julian, Fidel. I mean sure, we’re talking about a decrepit, broken-down old Communist with serious health issues here. But so is Fidel. 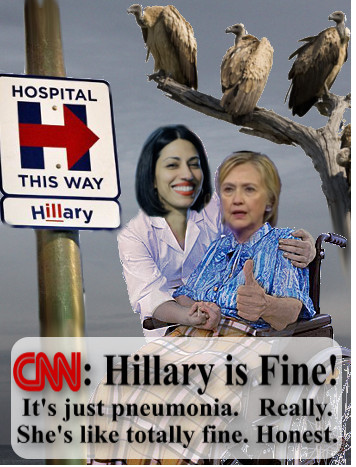 If I were them I would start printing up the “Anthony Weiner 2016” posters and T-shirts before daybreak tomorrow.
They could tout it is the most transparent candidacy in history. 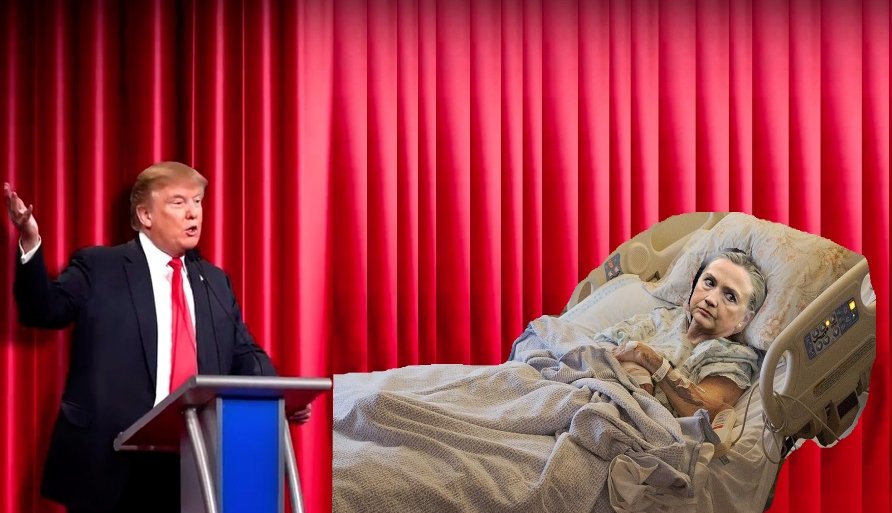 Carefully looking at the video; HILLARY DIDN'T "FAINT", SHE LITERALLY DROPS LIKE A BAG OF WET CEMENT WHEN THEY GO TO BRING HER INTO THE VAN. SHE COMPLETELY PASSED OUT, TOTAL DEAD WEIGHT, SHE FLOPPED FACE FIRST INTO THE FLOOR OF THE VAN LIKE A DEAD FISH BEFORE SHE IS CAUGHT AT THE LAST MOMENT BY HER SECRET SERVICE DETAIL. SHE IS TOTALLY UNCONSCIOUS AND DEAD WEIGHT!
Now for the fun/interesting part they aren't talking about:

Everyone, carefully examine the HIGH DEFINITION video of Hillary's total collapse (in contrast to the "fuzzy", out of focus version being foisted on the public by CNN, etc...) AND WHAT IS HAPPENING

1) Hillary is holding onto Huma (and visa-veras) for dear life; Huma is supporting Hillary as she walks toward the curb because Hillary is already clearly unstable on her feet.

2) As they walk towards the curb Hillary's head is gently floppong sideways back and forth like SHE'S NOT ALL THERE MENTALLY = SHE'S HAVING AN "EPISODE"/ATTACK.

3) Once they arrive at the curb area, HILLARY IS INCAPABLE OF STANDING UP ON HER OWN TWO FEET! SHE IS PROPPED UP AGAINST THE CONCRETE CYLINDER SO THAT SHE IS LEANING ON IT IN ORDER TO SUPPORT HER BODY WEIGHT AND TO KEEP HER FROM FALLING.

4) While leaning on/against the concrete cylinder, that isn't enough: HUMA HAS A HOLD OF HILLARY'S ARM TO KEEP HER FROM FALLING OVER!

5) While Hillary is leaning on/against the concrete cylinder and HUMA HAS A HOLD OF HILLARY'S ARM TO KEEP HER FROM FALLING OVER: HILLARY'S HEAD IS CONTINUING TO GENTLY FLOP SIDEWAYS BACK AND FORTH, LIKE THE "EPISODE" IS GETTING WORSE.

6) By the time her van arrives a short time later; HILLARY IS NOW COMPLETELY UNSTABLE ON HER FEET AS SHE IS REMOVED FROM THE SUPPORT OF THE CONCRETE PILLAR AND HELPED TO "WALK" TO THE VAN.

7) At this point HILLARY'S HEAD IS NOW FLOPPING MORE VIOLENTLY BACK AND FORTH AS SHE IS RAPIDLY LOOSING CONSCIOUSNESS; MORE PEOPLE ARE ALSO FORCED TO QUICKLY COME TO HILLARY'S AID IN ORDER TO PROP HER UP AND GET HER INTO THE VAN. *NOTE: AT THIS PIONT IN THE VIDEO SHE IS NOT REALLY WALKING ON HER OWN AT ALL ANYMORE.

Finally, as they go to "help her" into the van: HILLARY CLINTON LOOSES CONSCIOUSNESS ALTOGETHER, COLLAPSES AND FALLS FACE FIRST ONTO THE BACK SEAT PASSENGER FLOOR OF THE VAN!

If you look carefully you will see that her Secret Service detail barely saves her and breaks her fall JUST BEFORE SHE HITS THE FLOOR! She has lost consciousness entirely, and fallen so quickly that she lost her shoe which went UNDER THE VAN and was later retrieved by another member of her detail after her van left! That's how completely and physically "out of it" Hillary Clinton was by this point!

9) Hillary's COMPLETELY UNCONSCIOUS and her body is now "dead weight". Her Secret Service detail that broke her fall has to literally lift her up, position her into her seat where upon they close the door and rapidly wisk her away to "points unknown".

Hillary Clinton didn't "faint"; the woman is very sick, deathly ill and physically and mentally incapable of serving as President of the United States, or as "Commander in Chief" and the Democrat Party and everyone intimately associated with her knows it! But, they are doing everything within their power to hide these facts from the American people.

Please, do not take my word for any of this. Carefully examine the HD video for yourself and compare my list of observations with what you see happening. I believe you will be able to confirm my observations.

If you believe my list of observations as to what actually happened is correct: Please pass this list, along with a working link to the HIGH DEFINITION VIDEO (or a saved copy of the video) of Hillary's "event"/attack itself to as many of your friends, relatives, and associates as soon as possible before the main stream media and the "powers that be" seek to delete, scrub, remove and erase all evidence of the event from the Internet, least the public see this event, and what it means, for themselves.

People here on FR may want to also make a copy of the clear, unfuzzy HIGH DEFINITION video of Hillary's collapse and save it to a secure hard drive so the evidence doesn't "disappear".

Well, my dire concern appears to have already come to pass. I was going to include several html links to the ENTIRE, LONG video showing ALL of what I listed and described above as having taken place, but the entire, longer videos have been "scrubbed", expunged from YouTube and the Internet so that they have "disappeared"

The LONGER HD VIDEO, showing the events leading up to Hillary being propped up against and on the concrete bollard to support her weight, where she is unsteadily walking with what appears to be Huma Abadin and which ALSO INCLUDES HUMA HOLDING ONTO HILLARY WHILE SHE IS LEANING ON AND AGAINST THE CONCRETE BOLLARD WAITING, BEFORE THE VAN ARRIVES, appears to have been "scrubbed"!

Now, the only video I can seem to find is a much shorter, edited "clipped" version of what transpired, which intentionally begins when the van arrives and picks up what happpens from that limited point on.

This is important because the intentionally edited, "clipped" video prevents the viewer from seeing exactly how deathly ill Hillary Clinton really is.

The edited/clipped video begins right when the van arrives.

1) At this exact moment Huma has briefly left Hillary's side and is no longer holding onto her to keep her steady (because the van has arrived and they need to prepare it for Hillary to enter).

So from the viewer's standpoint Hillary is "fine", up to this point; ALONE (this is important, because those who edited the content want to make sure everyone viewing this video believes, and come to the conclusion that = "Hillary is healthy and doesn't need anyone's help to stay upright"), and "standing on her own two feet" (also important, even though it is clear that the concrete bollard Hillary is propped on/leaning against is what is keeping her upright).

And because they have "clipped"/edited the video it appears that all of a sudden, out of nowhere Hillary just "faints" as she enters the van. So in the viewer's mind = this is just a one moment incident, instead of the inevitable culmination of a serious health condition which had been progressively getting worse over a very short period of time to the point where Hillary ultimately collapsed into total unconsciousness.

Do not be fooled or deceived by the main stream media and the "Clinton Machine": Hillary didn't "faint", she didn't "overheat", she isn't "suffering from pneumonia"; Hillary Clinton is deathly I'll and suffering from a seriously debilitating illness which is progressively getting worse, like late-stage Parkinsons disease.

Hillary Clinton is a very sick woman who is not physically or mentally capable or qualified to serve as President of the United States, or Commander in Chief! 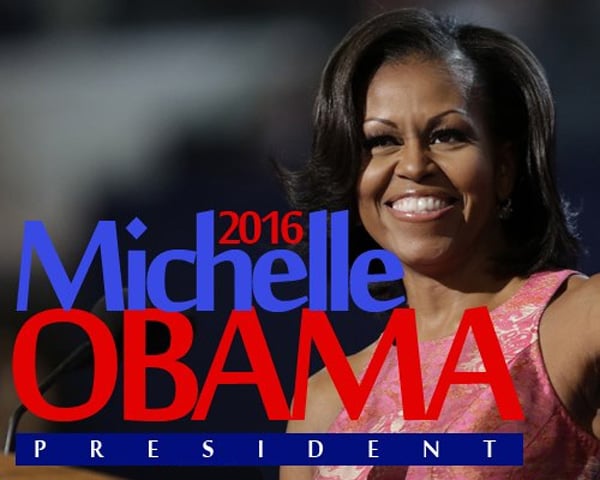 Liberals already have their marching orders:

“Hillary Clinton has finally made Republicans care about a woman’s health, and she’s not even President yet.”

“Despite having pneumonia, despite the heat and humidity, Hillary Clinton shows up.”

One good video, on LiveLeak:

Look back to October 15, 1992, when Bill Clinton’s campaign, after months of pressure from the media, finally gave a detailed health history of the candidate.

You may recall that one of Bill Clinton’s rivals in the primary that year was Senator Paul Tsongas, but Tsongas and his doctors lied through their teeth:

When Tsongas ran unsuccessfully for the Democratic nomination the 1992 presidential campaign, he made an issue of his survival from a form of cancer known as non-Hodgkin’s lymphoma. But Tsongas and his doctors at the Dana-Farber Cancer Institute in Boston, Ronald W. Takvorian and George P. Canellos, repeatedly said he had been cancer-free when he had not. In so doing, they implied that the cancer was cured when indeed it was not curable.

Tsongas died in 1997. If he had been nominated and elected, he would not have completed his term.
National Review

Similar topics
» We don't need Hillary
» Hillary: "You can keep it"
» Hillary May Not Run...
» Inequality Is Damaging The US Economy
» Go Hillary!