WHL wrote:They have decided they don't like her and won't vote for her.  Is that so hard to understand.

Really...and you know this to be true because Cleo the Psychic told you this is the future voting outcome?? How can you claim to know how people will vote in 2 yrs
_________________
The health of a democracy is dependent on an educated citizenry. Political illiteracy is the manure for the flourishing of political appeals based on sheer ignorance.

WHL
They have decided they don't like her and won't vote for her. Is that so hard to understand.

we are so fortunate, think of the millions that will be save now that WHL has let us know we do not have to vote, that she's taken care of things and has already picked the next leader.
_________________
America is one nation under God, indivisible, with liberty and justice for all. Not just for people who look or worship a certain way.

22 percent of voters liked her just a while ago. Now she is down to 11.

News Buzzard wrote:Career criminal, Daryl Issa, came up with nada!! I wonder how much that fishing expedition cost us??

More is leaking out, including the criminal charge of weapons-trafficking and drug-running at the highest levels.

The corporate media, from MSNBC to Fox, have treated the issue of Benghazi as the “third rail” of subjects. They call it a scandal, but it’s not. It’s a crime, as is its cover-up. They have failed the American people by not holding government accountable for their illegal actions, which are only escalating as a result. MSNBC considers Benghazi a “myth” trumped up by a right-wing political agenda, while Fox considers the topic just too “edgy.” Meanwhile, the American public is being thrust into a covert war without our approval yet in our name, and the flagrant violations of U.S. and international law are being conducted with impunity. Continuing the cover-up will merely embolden the criminals and criminal element within our government and will cost more lives in the process. It is also leading us headlong into World War III. [snip]

"The current plight of whistleblower Robert “Tosh” Plumlee began last October, when he posted 11 “questions” about Benghazi and the illegal arms running operations on Facebook. As quickly as they appeared in the social media stream, the CIA and the Department of Justice instructed him to remove those questions from the public domain and remain forever silent about the covert and highly illegal weapons running operations being conducted. Despite his classification as a photojournalist with Salem-News that provided him the legitimacy to report on Benghazi, he complied." (Much more)...
http://canadafreepress.com/index.php/article/62819#at_pco=smlrebv-1.0&at_si=54a7c73e3ecc16e9&at_ab=per-2&at_pos=3&at_tot=8

WHL
22 percent of voters liked her just a while ago. Now she is down to 11.

Right, because we all know that polling companies never make mistakes and get it wrong.

Why Hillary Will Win

The 46 Democratic Senators received 20 million more votes than the 54 Republican Senators currently in the chamber. This is the reason why Hillary will win!

Elisabeth Warren NOW says, "She's not running", so we're back to Hillary!

Or are we back to Warren's first lie?

Hillary will win handily, if the Stupid Party does like it's preparing to do and nominates some tired neo-con re-tread like Romney or Bush.

I know, just what we need another Bush in the White House! And Romney is just another Bush, unfortunately. The one exception is, he is an excellent business man.

Anti Federalist wrote:Hillary will win handily, if the Stupid Party does like it's preparing to do and nominates some tired neo-con re-tread like Romney or Bush.

A retread would have a good chance, if he ran TV ads that went...

That was a quote from Hillary!

Well, that didn't take as long as expected.

In a hypothetical match-up, her margin over Jeb Bush, the closest GOP president, was cut in half to eight points this month, 45%-37%, according to Zogby. That's down from a whopping 15-point lead in December. Similarly, the former first lady's 15-point margin over Mitt Romney slid to nine points, 46%-37%.

Still sizable margins, to be sure. But trending uncomfortably in the wrong direction even before an announcement, as Clinton goes to ground to plot her campaign, assemble staff and devise a credible rationale other than gender for why Americans should let her move back into the White House, this time in the West Wing.

Most Democrats won't take much convincing. She's her party's overwhelming heir apparent, which actually hasn't worked out too well in recent U.S. political history for Al Gore, John McCain, Romney or Hillary herself in 2008.

But she'll need to convince significant numbers of independents and even Republicans on a shifting political landscape that's been trending toward conservative states, both in the census and recent elections.

Even with veterans of the president's winning campaigns jumping over for Obama 3.0, that could be a hefty challenge given Clinton's quarter-century of public controversies; HillaryCare's website didn't fail, but that's because she didn't have one. Her brief Senate career was highlighted by nothing really.

And her four years as the well-traveled face of Obama's disastrous foreign policies that allowed Syria to decay into bloody chaos, Iraq to go it alone militarily, permitting ISIS to fester and spread, and post-Gaddafi Libya to become one large al-Qaida training camp.

Then there's the deadly Benghazi debacle with its inexplicable security lapses, still under investigation by a House Select committee.

With a swaggering Obama indicating he won't go silently into retirement, Clinton faces the tricky maneuver of separating from him enough to shed sufficient association with the failures and deceits in voters' minds without totally alienating Democrats' extreme left wing, inviting Elizabeth Warren into a divisive competition.

Did you hear Clinton's comments on Obama's hollow State of the Union? Crickets.

Then, there's Clinton's health and age. She'd be 69 by election day next year compared to a field of major Republican candidates with fresh faces who average 50 including Romney and only 47 without him.http://news.investors.com/politics-andrew-malcolm/012615-736218-hillary-clinton-jeb-bush-mitt-romney-scott-walker.htm#ixzz3Q1tZIt9O

It won't be Hillary or Fauxahauntis...

.
Republican ads can sink her ship—starting with this quote to a large African-American group:

News Buzzard wrote:The 46 Democratic Senators received 20 million more votes than the 54 Republican Senators currently in the chamber. This is the reason why Hillary will win!

Received from a NH Friend:

I know there are some of you that may be Democrats, and love Obama, but this is for Christians first, politics later. I do pray this doesn't offend anybody, but it has to be sent. If you love your Lord first and your politics later, you will appreciate this message.

When we get 100,000,000, that's one hundred million willing Christians to BOND together, voice their concerns and vote, we can take back America with God's help. Become one of the One hundred million...

Then let's get 200 million. It can be done by sending this email to your friends. Do the math. It only takes a willing heart and a fed up soul. God Bless America and Shine your light on Her..

In 1952, President Truman established one day a year as a "National Day of Prayer."

In 1988, President Reagan designated the first Thursday in May of each year as The National Day of Prayer.

In June 2007 (then) Presidential Candidate Barack Obama declared that the USA "was no longer a Christian nation."

HE PRAYS WITH THE MUSLIMS! I guess it doesn't matter If "Christians" are offended by this event - we obviously don 't count as "anyone" anymore.

Now he is encouraging schools to teach the Quran for extra credit in schools while they cannot even talk about the bible , God or salute the American Flag.

The direction this country is headed should strike fear in the heart of every Christian, especially knowing that the Muslim religion believes that if Christians cannot be Converted, they should be annihilated.
_________________
..."The beauty of being a liberal is that history always begins this morning..."

Again, what does Hillary offer above FauxCahontas? 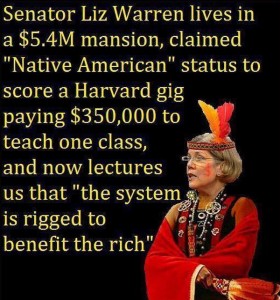 AGain, they are hypocrites!!

Anti Federalist wrote:Hillary will win handily, if the Stupid Party does like it's preparing to do and nominates some tired neo-con re-tread like Romney or Bush.

Even a Romney or Bush can beat "a scheming careerist who sees her husband’s rise to power as little more than a springboard for her own ambition".

I wouldn't know about that: here's a Dim citing her lack of accomplishments:

“I would argue that between what’s happening internationally in her tenure as Secretary of State, no real accomplishments, and now these new allegations coming out about the Clinton foundation and the book coming out next week. These are real,” Chafee said.
Washingtonfreebeacon

Although he didn't come right out and call her a "Corruptocrat".

News Buzzard wrote:"...Do you have any shred of evidence...??

Krauthammer: Hillary Email Dump Is ‘Farce,’ We Saw What She Wanted Us to See

Hundreds of Hillary Clinton‘s emails were released today, something Clinton herself said she wants, but Charles Krauthammer doesn’t really buy this is some great victory for transparency and disclosure. “There isn’t a shred of evidence,” he said, “because she shredded the evidence. This whole release is a farce.”

He pointed out that it’s not like every little email Clinton ever sent will be released to the public, only the ones ‘scrubbed and cleansed and decided upon, chosen by her own people, acting in her own interest.” And, Krauthammer added, it’s working, because the media is eagerly looking through “pre-scrubbed material”...
Mediaite

Krauthammer has it right.

Krauthammer is never right about anything!!

Krauthammer is absolutely right. It is no surprise at all.

What Difference Does It Make???

'The Great War of Our Time'

Morell is a senior CIA official—asked about Hillary's emails and server...

Hewitt: As a professional matter, do you believe that at least one or perhaps many foreign intelligence servers, services have everything that went to and from that server?

Morell: I think that foreign intelligence services, the good ones, the good ones, have everything on any unclassified network that the government uses, whether it's a private server or a public one. They're that good.

Hewitt: So that's a yes?

Hewitt after the interview:

I did not expect such bluntness from so high ranking a former official, but this is exactly the same answer I have received off the record from four other very senior, very experienced decision makers in the long war. The fact is clear that Clinton acted with reckless disregard for the security of the nation she was sworn to serve.

What difference does it make?