Two recent surveys put Trump and Sanders in second place for their respective Republican and Democratic nomination fight — and gaining ground on the party’s front-runners.

On Thursday evening, a new poll from WMUR-TV and CNN shows Trump trailing former Florida Governor Jeb Bush by 5 points among Republican voters in the Granite State. The same survey, conducted by the University of New Hampshire, shows Sanders following US Secretary of State Hillary Rodham Clinton by 8 points.

He will smash through the scripted PC nonsense and make them talk about issues that are important to many people.

If nothing else, I hope he will start a conversation. If he doesn't really care about getting elected but wants to "fix" the country, then he will continue to say what needs to be said and blast the press for making fun of him.

Despite controversial remarks concerning Mexicans, the odds on Donald Trump becoming the 45th President of the United States have actually improved.

Online sportsbooks opened Trump as a 66 to 1 long shot, but have since adjusted these political betting odds to as a low as 25 to 1.

Keep the Illegal-Immigration issue in the news!

And unlike most of them he hasn't backed down when the pressure is on.

Jamiel Shaw Jr. was killed by an illegal immigrant who had been released from jail the day before.

Jamiel Shaw recalled seeing his son, Jamiel Shaw Jr., lying dead in the streets where he used to play. Just a few doors from his Los Angeles home, the younger Shaw was gunned down, execution-style in March 2008 – the victim of one of the “invisible people.”

“We call it getting killed by invisible people, because they aren’t supposed to be here,” Shaw said Wednesday.

The man convicted of killing Shaw's son was an illegal immigrant who had been released from jail the day before on prior gun charges.

“I wasn’t gonna let them get away with it,” Shaw said. “You can’t let people think, ‘If you kill my loved ones, I’m gonna forgive you.’”(continued)
(Excerpt) Read more at foxnews.com ...

Jamiel Shaw was an honor student, his mother was in Iraq fighting for our country when her son was murdered by an illegal alien. Jamiel was not in a gang, he was a good kid had a bright future ahead of him. You won’t be hearing about this story on CNN or MSNBC, but if Jamiel had been killed by a cop there would be protests all over the place. Trump has tapped into a huge reservoir of anger that the citizens have for our feckless leaders who refuse to enforce the laws they took an oath to uphold. 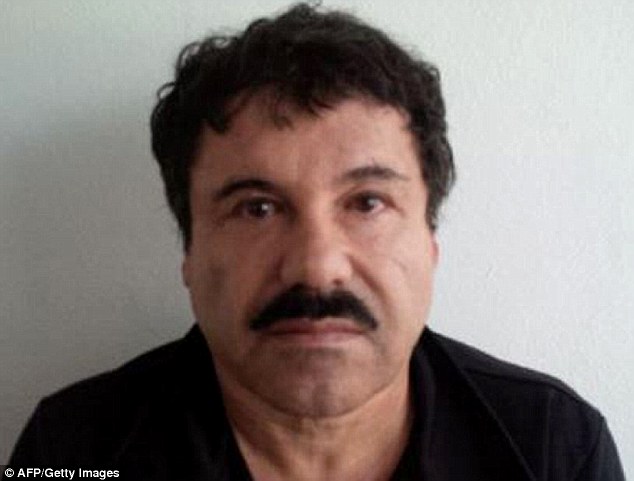 Trump has called in the FBI to investigate the source of the Twitter account which warned Trump he would be sorry he spoke out against Mexico.
Read more: http://www.dailymail.co.uk/news/article-3159344/There-s-no-jail-big-midget-Mexico-s-billion-dollar-drugs-lord-gloats-Twitter-escaping-prison-shower-block-tunnel.html#ixzz3foeGRGtk

Surely this threat has appeared on your TV set. 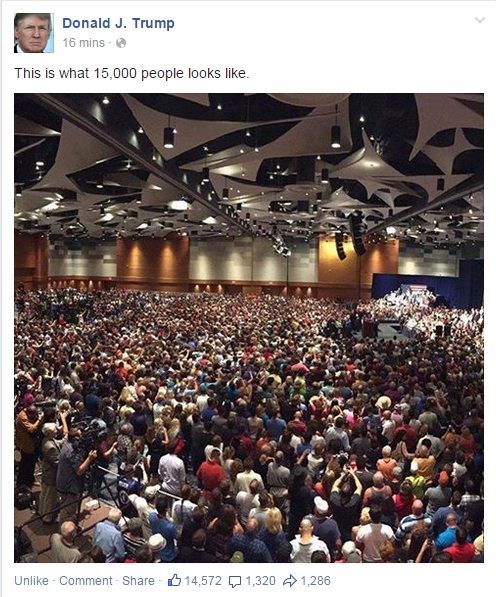 Where are the ropes to keep the Media "under control"?

Macy's Takes it In the Shorts...Over Firing Trump...

Macy's is paying the price for sacking Donald Trump, because we've learned thousands of customers are cutting up their Macy's credit card in protest.

Sources connected to the department store tell TMZ, Macy's has received complaints from approximately 30,000 customers since ending its relationship with Trump nearly 2 weeks ago.

We're told the store has been "inundated with complaints" from customers who believe the department store is unfairly punishing Trump for his views on immigration.
TMZ

WHL wrote:And unlike most of them he hasn't backed down when the pressure is on.

"Failing candidate Hillary Clinton, who is desperately trying to hold on to her lead in the democratic primary against Bernie Sanders, is knowingly putting out lies about my stance on illegal immigration. I said “Mexico is sending”— I’m not knocking immigration or immigrants, but rather am very critical of the country of Mexico for sending us people that they don’t want. Likewise I am very critical of illegal immigration and the tremendous problems including crime, which it causes.

She is desperate, she is sad, and she is obviously very nervous when she has to revert to issues that have already been settled given the absolute accuracy of my statement. She speaks about “my tone” and that’s the problem with our country’s leaders. They are more worried about tone than results! It’s not about being nice— it’s about being competent.

Hillary should spend more time producing her illegally hidden emails and less time trying to obfuscate a statement by me that is totally clear and obviously very much accepted by the public as true. I am honored, however, that she is attacking me, instead of Jeb Bush. Obviously she knows that JEB is no longer her real competition. The last person she wants to face is Donald Trump."

Very interesting about the Macy's deal. I hadn't heard that!

Why Trump and Bernie Have Flourished...

Despite the best efforts of CNN and Brianna Keiler to give Hillary Clinton a series of softball questions that would allow the Democrat presidential frontrunner to clean up all her scandals and well-publicized ethical lapses, in the latest Associated Press poll, her favorability numbers have actually decreased since their last poll in April.

Clinton’s biggest problem is that just 3-in-10 voters see her as honest.

The mega-scandal around Clinton’s decision to wipe her email server clean after Nixon-ing thousands of emails is dwarfed only by the Clinton Family Foundation’s serial-ethical lapses and apparent corruption revealed by our own Peter Schweizer in “Clinton Cash.”

While the media has done its best to distract from the Clinton scandals with a month-long campaign of Todd Akin-ing Donald Trump, a public that now has access to the truth outside the media’s propaganda bubble through New Media, hasn’t been distracted enough to forget the scandals, or that Clinton has yet to explain them to the satisfaction of anyone with any kind of moral compass.

The honesty issue is trickling down into other crucially important areas for Clinton.

Clinton’s favorability rating is a disastrous 39%, compared to 49% who view her unfavorably. That’s a full 8% increase in Hillary’s unfavorable rating since April.

Among Democrats, Hillary’s favorability dropped 11-points, although it is still over 70%.

A mere 40% of those polled said Clinton is compassionate; a mere 30% described her as honest.
http://www.breitbart.com/big-government/2015/07/16/hillary-clintons-poll-numbers-collapse/

Actually, all I have to do is listen to her voice. I wouldn't want to share an elevator with her!

Trump spoke at the Weirs yesterday. I could see Trump wearing two US flag pins...!

I wouldn't have attended, but would like to have heard about it on WASR.

Supposedly there were 300 people inside and over 900 outside.. That is an amazing turnout, I think!

WHL wrote:Supposedly there were 300 people inside and over 900 outside.. That is an amazing turnout, I  think!

Yes, and especially as New Hampshire hasn't a clue as to what's happening in the rest of the country. (And this is just ONE issue!)

The most recent murder, in a "Sanctuary-City-for-Illegals", is burning into the Electorate's minds. (That is, those that aren't already "Grubered").

A Haitian immigrant who was released from prison in January after serving a 17-year prison sentence for attempted murder is back in custody on a murder charge in the death of a Connecticut woman last month.

The Bulletin reports that Jean Jacques's prison file was marked "Detainer: Immigration" and that Connecticut officials say he was released in January to the custody of the U.S. Department of Immigration and Customs Enforcement (ICE), but was never deported.

On Monday, the 40-year-old Jacques was in a Connecticut court to answer to murder and drug charges, stemming from the June 15 stabbing death of Casey Chadwick in Norwich, the city where Jacques lived before he went to prison. The 25-year-old woman's body was found stuffed in a closet.
(Excerpt) Read more at cbsnews.com ...

The first victim was shot and died later; still, the "Attempted-Murder" charge prevailed.

The second victim was knifed to death.

If anyone hasn’t noticed how biased and imbalanced most mainstream national media has become, their head is in the sand.

Case in point: Recent attacks on Donald Trump. Mr. Trump is making waves, the kind for which many Americans hunger. His no-nonsense, straightforward, candid messaging is one that Americans can finally absorb with pleasure and concurrence. Not in recent memory has a presidential contender been so transparent and open about his beliefs. Mr. Trump doesn’t opine based on what will or will not offend the audience.
http://www.bizpacreview.com/2015/07/19/opinion-trumps-boldness-refreshing-mccains-white-noise-annoying-226379#ixzz3gLVe1V8a

I don’t buy the war hero thing. Anybody can be captured

But you didn't hear much about that did you? WONDER WHY??????

Huffington Post has effectively "airbrushed" Trump from its pages—like Wolfeboro's "Stalinist Forum" would.

I'm sure the Trump camp is all upset.

DONALD TRUMP, GOP PRESIDENTIAL CANDIDATE: You keep bringing up negative. You only want to talk about negative. Why don’t you bring up the positive?

ANDERSON COOPER, CNN: I did.

COOPER: I started off with the Washington Post poll.

TRUMP: You started off the interview —

COOPER: No, I started off with the Washington Post poll.

TRUMP: You start off the interview with a poll that I didn’t even know existed.

COOPER: I started off with the Washington Post poll. Intentionally, because I knew you would accuse me of that.

TRUMP: All I know is every poll I am leading in and you give me these two polls where it is different states. They’re not even a national poll.

TRUMP: I’m sure the record is fine.

COOPER: I started off with the Washington Post poll where you are way out in front.

TRUMP: I just think it is very unfair. Talk to me about a poll I have never even saw.

COOPER: It came out today.

TRUMP: It’s not even a poll. It’s in three different states and you are hitting me with this. Frankly, I think it is a very unfair question. I think it is an extremely — you start off the interview with that. You don’t say, I led in the FOX poll. I’m leading in the ABC/Washington Post poll.

The Trump
COOPER: You’re leading across the board.

TRUMP: I am leading across the board. And then you hit me with this poll that I didn’t see before, where oh, gee, it’s not even that kind of a poll. All i know is I have a very big group of support. And I think one of the reasons.

COOPER: Among Republicans you are way out in the front.

TRUMP: You know, I have always been covered, fairly, accurately because it was usually a financial press. And you know numbers are numbers and my numbers happen to be great. So, I was always sort of treated fair.

Donald Trump to Anderson Cooper: 'The people don't trust you'

A fresh breeze comes to politics...