Go for a volume discount and buy another polygraph for the podium in the White House Press Room. And one for administration witnesses at Congressional hearings.

Every statement made by the President and his press people has become suspect. President Barack Obama and press spokesman Jay Carney would each need to pass a great many polygraph tests to restore even a slight level of public trust.

Could there be a greater contrast than this:

After the first day of the Obamacare website, www.healthcare.gov, the White House bragged that it had 4.7-million visitors. Now CBS News reports the total number of people who actually signed up that day was six. Single digit. Six.

Obama’s approval rating dropped to an all-time low this week. The polling was done even before Obama’s “you can keep your insurance” promise blew up with news that over 2-million people have had coverage cancelled. Credibility fell more this week when the White House and Obama personally launched a blatantly absurd campaign to cover-up his promise.

It is futile to try to convince millions of angry Americans that they misunderstood Obama’s plain-English promise: that people who liked their existing health care insurance could keep it. Obama repeated that promise dozens of times—before and after Obamacare was enacted—so many that trying to cover his trail now is like trying to hide Godzilla in a doghouse.

People never forgot that President George H.W. Bush said, “Read my lips—no new taxes,” and Bush only said that once.

There are plenty of websites where visitors can watch and hear Obama repeat his “you can keep your insurance” promise at least two dozen times. And each site may feature a different mix of two dozen occasions.

It was not an off-the-cuff or accidental, slip-of-the-tongue remark. It was a deliberate, cynical, falsehood. It was pre-planned, repetitive and calculated to mislead in order to gain public backing, secure support in Congress, and win votes in Obama’s election and his re-election.
One of Obama’s direct quotes:

And, in a campaign setting during the closing weeks of his re-election: “If you’re one of the more than 250 million Americans who already have health insurance, you will keep your health insurance. This law will only make it more secure and more affordable.”

Contrast that with the weasel words now coming from Obama, his White House and their apologists. Essentially their new claims boil down to this:

—According to Obama’s regulations, minor changes in your policy since 2010 (like a $5 adjustment in your deductible) mean “it’s not really the same plan anymore,” so now you can’t keep it. That’s the equivalent of saying that any day when you wear a different shirt, you become a different person.

—Besides, it was for your own good; Obama has done you a big favor. You never really “liked” your old plan, because it was a substandard “bad apple” plan. You only liked its cheap price. Well, duh! That’s what made it affordable!

It is the height of elitism for Obama to insist that we can only have top-of-the-line, government-approved products. By this standard, everyone would have to buy first-class airline tickets, stay only in luxury hotels, buy premium gasoline, only buy refrigerators with in-door ice and water dispensers, etc. And of course nobody could shop at Wal-Mart!

The truth is that Obama wanted to eliminate the competition for Obamacare. He wants everyone to rely on government; that gives him power and control. So affordable care was outlawed and only government-approved care was allowed to survive.

Those impacted are not a small segment of America. Despite what Obama claims, a lot more than 5% of the country are losing their insurance. According to details the Administration published in the Federal Register in June 2010, we can expect 93-million Americans or more, a third of the country, will lose their current health insurance because it doesn’t meet the dictates of Obamacare. These are not only individual policies; they also include group and company coverage.

That official projection was made in 2010, but not publicized.

The significance is that more than three years ago, Obama knew that his claim about keeping coverage was false. He rendered it false by how he chose to interpret Obamacare and to lock-in that interpretation with regulations.

Obamacare was built upon this lie.

Obamacare was sold upon this lie.

Obamacare relies upon this lie to eliminate competition.

Obama maintains this lie even today.

So how many other lies is he telling on other issues?

We should insist that Obama use a polygraph a lot more than he uses a teleprompter.

The Virtue of Taqiyyah... 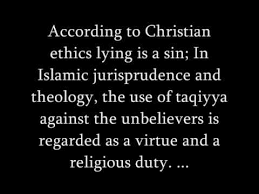 Re: Obamacare Falsehoods: Replace Obama's teleprompter with a lie detector

Oh, so that explains it. It's ok for him to lie.

Re: Obamacare Falsehoods: Replace Obama's teleprompter with a lie detector

Similar topics
» No teleprompter, no notes? Oh no!!
» The teleprompter president.
» ONE Democrat Sees the Light...
» Rice to replace Donilon as nat'l security adviser
» Vacation time again for the Obamas