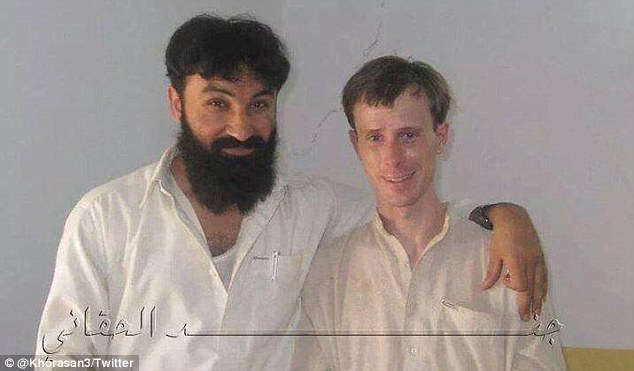 Say, where IS Bergdahl, anyway?

'Guess we'll have to wait until a British source publishes the answer...?

Returned from Afghanistan, to a jail in Mexico...

News Buzzard wrote:You never leave an American soldier out in the field !

What is Obama doing about the Marine jailed in Mexico?

Then-chairman of the Joint Chiefs of Staff Admiral Michael Mullen admitted that Bowe Berghdal was a deserter, and said that he did not know why the military was focusing so much energy on trying to save him, according to one of Bergdahl’s platoon mates. “The joint chief of staff, Admiral Mullen at the time. He came out to our unit and had Thanksgiving dinner, and he said, ‘Yeah he walked off, everybody knows he walked off, I don’t know why they’re trying to’” pretend that he didn’t.
—Daily Caller

I don't know, either!

US tried to ransom Bergdahl...

In a Nov. 5 letter to Defense Secretary Chuck Hagel, [Rep. Duncan Hunter (R-Calif.)]wrote "It has been brought to my attention that a payment was made to an Afghan intermediary [to spring Bergdahl]...

I guess you'd rather abandon one of our POWs, AWOL or not.

Bergdahl to be tried as a deserter, Pentagon said yesterday...

U.S. soldier Bowe Bergdahl has been charged with desertion for leaving his unit in Afghanistan and joining up with the Taliban. It’s about time. After months of stonewalling as the evidence that Bergdahl was a deserter mounted ever higher, U.S. officials could ignore it no longer.
(Excerpt) Read more at frontpagemag.com ...

And I think Obama knew when he made a big deal of his release with his parents, don't you?

Laying It On, Where It Belongs...

When President Obama traded one deserter for five evil terrorists hell-bent on destroying America, rational people did not believe the Obama administration’s claims about this traitor’s “health crisis,” or claims that he served “with honor and distinction,” and certainly not President Obama’s claim that this was a good deal for America.

After putting the country in danger, President Obama celebrated Bergdahl in our Rose Garden, arm in arm with his smiling father greeting Americans in Arabic and Pashtu, as our loyal troops cringed. In fact, in the days that followed, the Obama administration actually smeared the vets who came forward to tell the truth about Bergdahl’s traitorous desertion.


Now finally public disclosure tells the truth – that Bergdahl is a deserter. In my book, he is a traitor. Also, reports show the majority of the terrorist leaders Obama set free in exchange for this deserter have taken steps to hook up with the enemy – their Taliban pals in Afghanistan. As rational Americans predicted, the prisoners didn’t see the light while being freed at Gitmo, instead they burrowed further in the darkness of jihad, laughing all the way back to the battlefield to rejoin their death cult in the fight against U.S. troops, for when they are soon released from probation in Qatar, nothing stops them.

President Obama’s prisoner swap clearly undermined our forces during a time of war; he violated law by releasing terrorist prisoners without giving Congress the required 30 days’ advance notice; he created more distrust among our allies; he disrespected our loyal and sacrificial troops by actually honoring a traitor; and most significantly, our own Commander-in-chief endangered America.

Congress, if putting our nation in danger doesn’t rise to the level of “high crimes,” then nothing does. But since you’ve unequivocally and inexplicably taken impeachment off the table for anything Obama does while on your watch, what do you intend to do about this? If you do your job as balancers of power, we can surely expect repercussions, correct? While you're thinking about your responsibility, consider the men who DID serve with honor and distinction, but of course were never celebrated in our Rose Garden. These men of courage and good character were killed while obeying orders to find and protect the celebrated deserter Bergdahl.

Mr. President, if you can pull yourself away from your all-important basketball brackets and buckets of popcorn, you too should take a good look at these selfless young troops who gave all for their country. We await your explanation on all of this; certainly even a complicit media deserves it. More importantly though, the families of our fallen heroes deserve the most heartfelt apology.

Obama is so unbelievable.

Think of a sensible action, and Obama will do the opposite. It's scary to think that Michelle could run for the Presidency—and win!

Who says she could run for the presidency and win? She would be worse than Hillary! Which reminds me, what did Hillary ever do to deserve getting elected as a Senator, then Sec Of State? Nothing except lie and be First Lady. Well, what did Obama do for that matter. If you were a private company you would never hire either one of them.